There are three certainties in life: death, taxes and the structure of the Dallas Cowboys season. Every year is the same for the Cowboys. They struggle early on, prompting rumors to circulate regarding Wade Phillips' job security, and then they go on a roll until they lose early in the playoffs. Jerry Jones must feel like he has amnesia.

However, there is reason for optimism in Dallas this season. The Cowboys, currently 3-0, have beaten their first three opponents by the combined score of 168-0.

The reason for Dallas' sudden success is a secret weapon Phillips unearthed during the offseason. While visiting his home of Turkey Neck Town this past February, Phillips made a discovery one day when he was wandering aimlessly around the village's mud hole.

That might be the understatement of the year. What Phillips discovered was a golden orb, capable of making great football decisions as quickly as possible. Phillips began using this golden orb as much as possible, and the two quickly became inseparable. Here's a photo of Phillips and the golden orb during Dallas' practice on Wednesday. 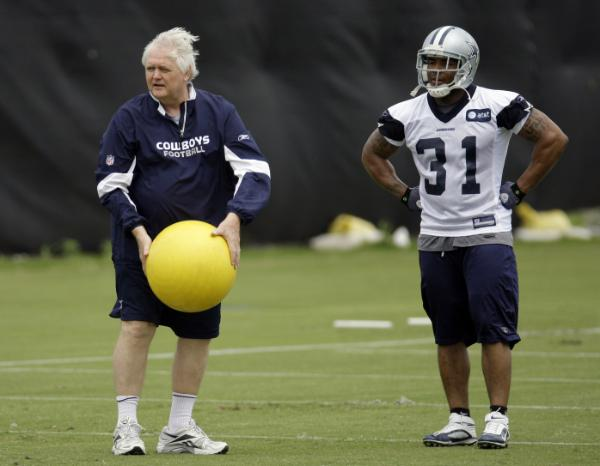 "The yellow ball told me that runnin' Marion Barber a lot was no good," Phillips said.

Indeed. In years past, the Cowboys would have stuck to pounding Barber inside the opponents' 5-yard line. With the golden orb calling the shots, Dallas has become much more unpredictable. As it stands now, the team has a 100-percent red zone efficiency.

"I saw no use for Roy Williams, so he has been eliminated," the golden orb said. "Rest assured, he will never be heard from again."

As for Sunday's game at New England, the golden orb had some harsh words to say about his next opponent.

"We will destroy the New England Patriots on Sunday," the golden orb said. "Their head coach is illiterate, their offensive coordinator is a stalker, and their quarterback is a drunk. I will devise the perfect game plan to annihilate the team and expose them as a fraud that had no business winning the Super Bowl last year."

Emmitt expressed no concern regarding the golden orb's threats.

"I know only one yellow ball that matter, and that is the sunshine," Emmitt said. "The yellow ball in denial, and denial is not only a river that float in Texas."

Emmitt questioned the golden orb's ability to make Phillips into a better coach, hinting that Dallas' 3-0 start has been a product of pure luck.

"I know Wade Phillip for a longed time, and believe me, Wade Phillip do not know how to coachesize football very good," Emmitt said. "Wade Phillip is an old dog, and you can't teach an old dog new trick or treat."

While Emmitt basically shrugged off the golden orb's threats, offensive coordinator Eric Mangini took offense to being called a stalker.

"I'm not a stalker, I got Erin Andrews' AIM screen name fair and square - her friend gave it to me," Mangini said. "And then I got her phone number from her phone bill that was laying around her house one day. I saw that she left her house unlocked one afternoon when she went to the beauty salon, so I went inside to lock the house for her, and her phone bill was right there on the kitchen table, so that's how I have it."

"This is going to be easier than I thought."

All hope seemed lost for the New England Patriots when they were down 27-0 at halftime. Dallas' new secret weapon seemed to be too much for them to handle. Fortunately, the Patriots inadvertently unleashed a secret weapon of their own that was able to lead them to victory.

JaMarcus Russell, New England's water boy, was distracted throughout the first half. No one was getting any water because Russell stared at the Cowboys' sideline with a vacant expression on his face.

As the team went into the locker room at halftime, Russell remained on the field. A couple of minutes later, he approached Dallas' bench area, where the golden orb was feeding information to Wade Phillips. The following conversation was overheard:

Golden Orb: What do you want from me, fool? Can't you see that I am discussing my perfect game plan with this bumbling idiot of a head coach? This takes a lot of effort you know, so whatever it is you want, make it quick.

Russell: Uhh... I think that I want to eat Skittle, do ya tink so?

Golden Orb: Skittles? What the hell do I care? I have no Skittles, but if you want to eat Skittles, go ahead. No one's stopping you.

Golden Orb: Giant yellow Skittle? What are you...? No, I'm not a Skittle!

Russell: I want eat giant yellow Skittle, I tink so!

In the blink of an eye, Russell swallowed the golden orb whole. As this occurred, Phillips suddenly became very disoriented and confused.

"Runnin' the ball with Marion Barber is gonna be good," he constantly muttered to himself throughout the remainder of the intermission.

True to his word, Phillips ran the ball with Barber on 16 consecutive plays in the second half. All Barber could do was fall forward for one yard each time, causing the Cowboys to go four-and-out in all four of their second-half drives. This allowed the Patriots to stage an incredible comeback. The final score: New England 28, Dallas 27.

An incoherent Phillips had no answers for the Dallas media afterward. When one reporter asked why Phillips ran the ball with Barber on every play, Phillips responded, "I thought Barber ran the ball good."

Owner Jerry Jones, on the other hand, was enraged. While Jones has always defended Phillips in the past, there was no vote of confidence forthcoming this time.

"That idiot better go back down to that mud hole and find me another giant Skittle," barked a ruddy-faced Jones. "And that JaMarcus Russell fella hasn't heard the last from me either."

Emmitt, meanwhile, was quick to praise his water boy.

"Jermichael Russell save my behind for the third time in my lives today," Emmitt said. "The first time happen when he stop up us the bomb from Todd Haley, and the second time was when he rescued all those peoples from that fat coach who look like Dr. Robotnik from the Sega Genocide game Sonic the Hedgehog Brothers."

Emmitt gave Russell the game ball. A beaming Russell was the center of attention amid media interviews.

"Haha, I eat biggest Skittle I ever see... uhh... and den all the teammate say I do good job and be reason for winning game... do ya tink so?" Russell asked/said. "I tink I eat enough Skitttle already but now I tink I need to spend all money I make on Skittle so I can eat more Skittle, do ya tink so?"

In the wake of today's events, Emmitt would probably encourage Russell to eat as many Skittles as he wants.