It seemed as though the public was extremely disappointed with Emmitt's actions yesterday when he burned every football fan with his magical goose.

"It made no sense," said a fan of Emmitt's who was so passionate about the man that he named his son after him. "Emmitt had a chance to kill Rochelle Meadows and Dominick Lime for murdering his secretary and translator Melissa Sturgis, I think her name was, and yet he decided to burn innocent people instead. How does that make any sense?"

It doesn't, but don't tell that to the uptight media. Journalists gushed about the so-called poetic direction Emmitt took.

"The signs were there, you idiots," a lying journalist wrote, condemning the public. "Emmitt has killed before, including members of Statue-13. He colluded with the Russians to become commissioner of the NFL. He did other bad things. Emmitt was always this even villain. How have you imbeciles not seen this before!?"

It wasn't difficult for the articles of impeachment to get passed, and understandably so, given that Emmitt was now a football fan murderer. We didn't support Emmitt's impeachment prior to Thursday's events, but it seems wrong to have a football commissioner murdering football fans.

Emmitt was swiftly arrested and placed in solitary confinement. We're not sure why he didn't use his magical goose to torch the police, but if we had more time, we could delve into that plot hole. But we don't have much time remaining, so let's just move along.

Emmitt's advisor, Darren Sproles, was also arrested. He was brought before the government hours later.

"Beep, what should we do with him, beep?" Goodell Bot 2.0 asked. "Beep, he was responsible for my girlfriend Melissa Stark dying, and I want to see him punished, beep."

"I have an alternative solution," Sproles said. "Emmitt has been impeached, so you now need a new NFL commissioner."

"Who are you going to recommend, yourself?" asked congressman Ilya Hatesamerica. "I would like to suggest Cornelius Bin Laden as NFL commissioner. His father Osama did some things, but was a nice guy overall."

"What about minimum wage?" fellow congressman Aqib Talib asked. "I would like America to have a minimum wage of $50,000 per hour."

"I agree, but let's focus on who the new commissioner will be," Hatesamerica said. "People tense up when they hear the name 'Bin Laden,' but they don't tense up when they hear the word 'America' or 'cereal' or 'cotton candy?' Americans have a problem, so let's go with Cornelius Bin Laden, or perhaps his cousin, Reginald Von Bin Laden. They will kill- I mean make football a better sport."

"I have a better suggestion," Sproles said. "And I believe you'll like this, for I am the cleverest man in the seven continents."

"He is pretty clever," one congressman whispered to another. His friend nodded in agreement.

"I would like to submit the person with the greatest story to be the commissioner of the NFL," Sproles said. "And who has a better story than Emmitt Smith IV, the III, the V, Sr., the VIII, Jr. Sr. XII Smith? He discovered what's north of North America. He became the Three-Eyed Baltimore Raven. He flew! I believe he would be the best NFL commissioner."

And just like that, Emmitt Smith IV, the III, the V, Sr., the VIII, Jr. Sr. XII Smith was named the new NFL commissioner despite not having any qualifications. All but four congressmen - Octagon-Vortex, Hatesamerica, Talib and some other House member whose name no one can remember - approved of the vote. Journalists and blue check-marked people on Twitter cried about possible racism, but no one who matters cared.

"I will order my father, Emmitt, to Antarctica to continue the NFL Antarctica Expansion," Emmitt Smith IV, the III, the V, Sr., the VIII, Jr. Sr. XII Smith said. "He will renounce all titles and sire no more children."

Emmitt Smith IV, the III, the V, Sr., the VIII, Jr. Sr. XII Smith easily could have just demoted his father without nonsensically banishing him, but he decided that exiling him would be the better decision.

We're not sure we agree with anything that happened, but that's the plan everyone is going with, apparently.

It's been a week since Emmitt Smith IV, the III, the V, Sr., the VIII, Jr. Sr. XII Smith was named the new NFL commissioner, and yet fans are still outraged.

"Season 12 was f***ing horrible," one fan said. "It started off fine, but nothing made sense, plot-wise. Why was Emmitt Smith IV, the III, the V, Sr., the VIII, Jr. Sr. XII Smith named commissioner because he had a good story? Why would anyone care about his story? And his story wasn't good to begin with. What idiot wonders what's north of North America!?"

"Yeah, why would anyone agree to make him commissioner?" another fan asked. "I don't even see why Emmitt should have been removed as commissioner. Yeah, he killed all the football fans, but that was crap. His story arc was not heading that way, and I don't care what some journalist hack says; there were no signs that he would kill innocent fans when he had an opportunity to get revenge on those who killed his translator!"

"And what's up with all of the characters surviving the Long Fight?" a third fan asked. "That fight was terrible. We had so much buildup, and then it was over super quickly, and it ended because some woman we never heard of before killed the White Russian Czar. Why couldn't Emmitt fight Thornin Yourside? He could have avenged his son! He had so much more of an emotional attachment to Thornin Yourside than his sister."

"And what about the next battle!?" another fan joined in. "We were told of how badass the Golden Compass mercenary group was, and how Emmitt's goose was no match for elephants, and yet Emmitt's goose killed everyone instantly."

"And what's up with the horse Emma Smith III rode off on at the end of Episode 15?" a fifth fan chimed in. "Why was she even in the vicinity to begin with? How did the horse survive all of the flames? Where did she go after riding off into the sunset? Why wasn't she at Emmitt's hearing at the end?"

"That hearing was crap, by the way," a sixth fan complained. "Why were they listening to Darren Sproles when he was under arrest? And why would Emmitt's son banish his own dad to Alaska? Emmitt Smith IV, the III, the V, Sr., the VIII, Jr. Sr. XII Smith is in command. He doesn't need to get rid of his dad."

"Emmitt on the Brink has gone to s**t," a former fan stated. "It used to be great, but now the author seems like he's just mailing it in. He cut each season from 21, to 17, to 16 episodes, and some of the episodes this season didn't even have two articles. Then, at the end, it was clear that the author was aiming to move on to other things, maybe the Adventures of Tom Brady's Haircuts. Emmitt's descent into madness could have been properly developed with time, but this whole season felt rushed."

We couldn't agree more, so we'd like to point out a petition that's circulating online. Its goal is to reach one million signatures. Here's the link: 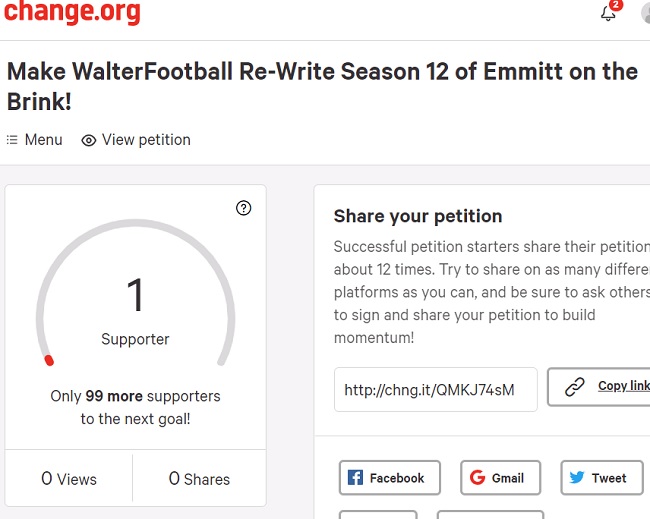 It's unclear if this petition will spark a re-write of Season 12, but we can only hope the author takes notice of everyone's frustration and anger pertaining to how the most recent season of Emmitt on the Brink was written.