Don't worry. Emmitt is now on his way to North Korea after mistakenly landing in North Carolina. His mission to stop Kim Jong-un from blowing up America as retaliation for how Tom Brady was treated in Deflategate is still proceeding as planned. However, while he's preparing to fly across the Pacific Ocean - or Specific Ocean, as he called it - there are several NFL-related stories worth writing about.

The first is taking place in Philadelphia, where Chip Kelly, the current head coach of the Philadelphia Eagles, has once again been accused of being a racist.

"It's ridiculous," Kelly said, shifting his eyes to a reporter who had his hand raised to ask a question. "You think you can ask the Great Chip Kelly a question? You're too small for that. Literally small. Check back with me when you're 6-foot-2 or taller."

Kelly had previously been accused by DeSean Jackson, LeSean McCoy and Brandon Boykin, all of whom had salty attitudes when either being released or traded by the Eagles. Others defended Kelly vehemently, pointing out that Kelly has both drafted black players and burned the white robes he had in his closet. This was seen as Kelly voicing his displeasure for the KKK, but others were skeptical.

"Why exactly did he have those robes in his closet in the first place?" McCoy wrote on his blog, ChipKellyIsRacist.com. "I'm telling you guys, he's definitely racist!"

"Ugh, I don't know what to say anymore," Kelly said in response. "I found those KKK, I mean white robes in the park, and by looking at how small they were, I realized that they belonged to people shorter than 6-foot-2, so I decided to burn them. Nothing wrong with destroying property belonging to short people!"

Nevertheless, Kelly has continued to be accused of being racist, so he finally decided to take matters into his own hands. Kelly hired a security team to find specific individuals and capture them. He did this all across the country, and he'd load them into boats that sailed back to Philadelphia. The captured people were treated terribly and were given new names on their voyage. They were then brought to Kelly's dominion, where he paid his security task force for a job well done. And then he'd put them to work.

"Hard to find good help these days," Kelly said. "So I went out and? Tanner! Jake! Connor! You're watering my plants all wrong! Keep doing it that way, and y'all gonna get whipped!"

Kelly, as it turns out, managed to secure approximately 50 slaves, all of whom are white.

Completely appalled that Kelly was able to run a plantation with white slaves - he refused to recruit me because I'm Dominican - we went to famous activist Al Sharpton for a comment and perhaps a promise to end this injustice. Sharpton, however, was indifferent to the situation.

"Why should I care what Chip is doing?" Sharpton replied while counting the tax money he had stolen from the U.S. government. "No black people are being enslaved, so what's the issue? White people being enslaved is a good thing because it'll teach them a lesson."

Despite Kelly's actions, he's still being called a racist by his former players.

"Nice try, Chip, but you're being too transparent," McCoy wrote on his new article on ChipKellyIsRacist.com. "Sure, you now have white slaves, but that's only because you once again want to just surround yourself with white people. Where are the black slaves, huh? Why don't you have a single black slave on your plantation?"

Our guess is that Kelly simply wants to keep Sharpton from doing or saying anything about his operation.

The summer of 2015 was an embarrassing one for former Jets quarterback Geno Smith. It started out promising, as he had an interception-free training camp. However, one day in mid-August, he was sucker-punched by a scrub linebacker in the locker room after practice. The blow was so crushing that he shattered his jaw and was forced to miss about two months of action.

"Geno is a giant p***y," NFL analyst Cris Carter said at the time. "If he wasn't a giant p***y, he wouldn't have gotten so injured from just one punch. Oh, and he has no leadership in the locker room, and whatnot."

Smith attempted to take a selfie - self-absorbed morons used to take pictures of themselves called "selfies," but those were outlawed several years ago because it was deemed that they were the catalyst for the decline of America - and promised to return strong, but that never happened. Smith became the laughing stock of the NFL, and he quickly lost his job and roster spot. Several other teams considered signing him, but quickly realized that doing so would be a mistake, given that Smith would be ostracized in the locker room.

We hadn't heard from Smith in a very long time - we figured that he had resorted to drugs and was passed out in a gutter somewhere - but the former signal-caller made his return to the national spotlight a few weeks ago when he revealed that he had been training for another sport.

"I hired a trainer and everything," Smith said. "I've trained vigorously, lost weight and bulked up. I'm prepared to dominate a new sport."

The new sport is boxing. Shocking, we know.

"I'm prepared to fight for my life," Smith said with confidence. "As for whom I'm fighting, that has yet to be determined. I'll be in the Minor Circuit, but I'm not sure which opponent I'll face off against first."

Days later, news broke that Smith's opponent would be a 107-pound white man from the Bronx, as seen in this fight promo: 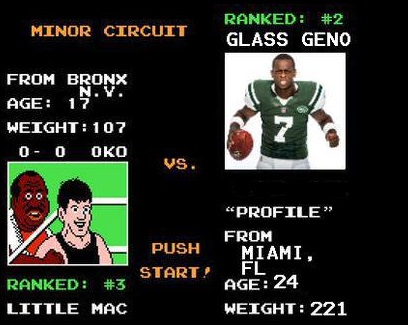 Smith noted that he was eager to begin his new career, but was perturbed by the nickname the Minor Circuit committee had given him.

"Glass Geno!? Are you kidding me?" Smith whined. "Just because I was knocked out once doesn't mean I'm Glass Anything. I'll show the whole world how vicious I am!"

Unfortunately for Smith, his bark was louder than his bite. In fact, Little Mac put him down rather quickly, as shown here in this frame-by-frame knockdown: 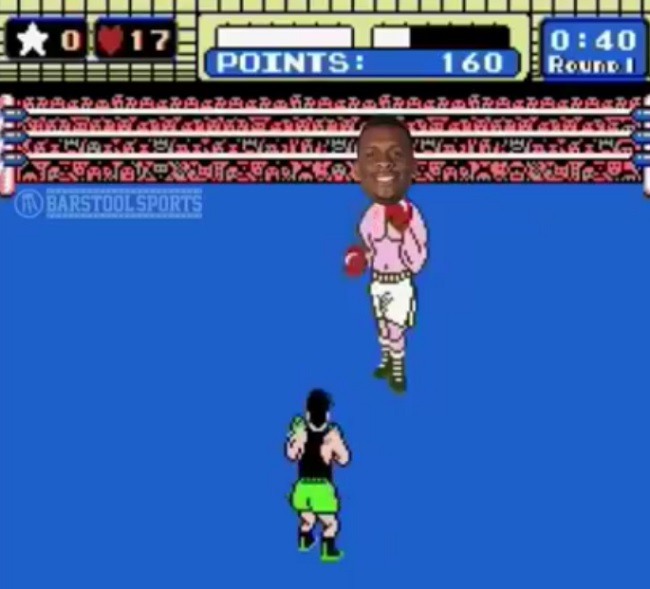 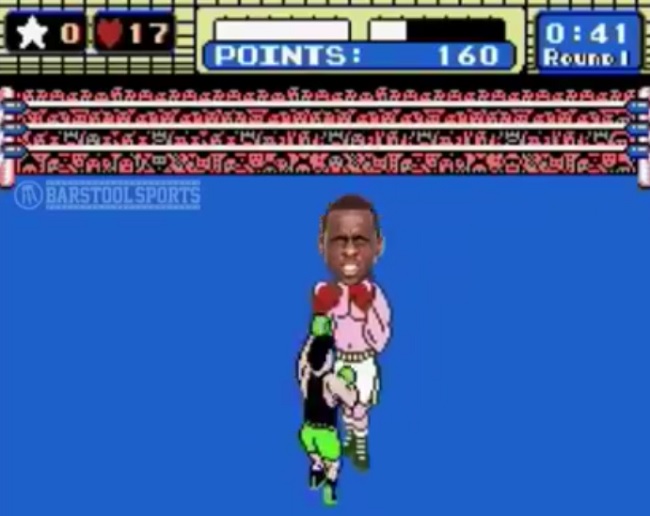 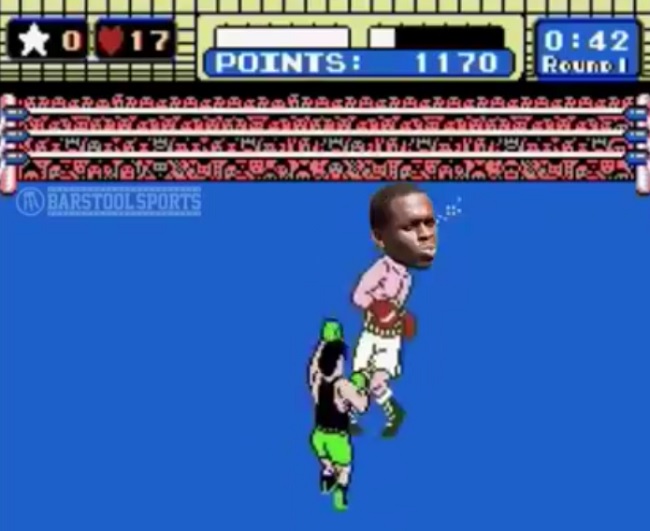 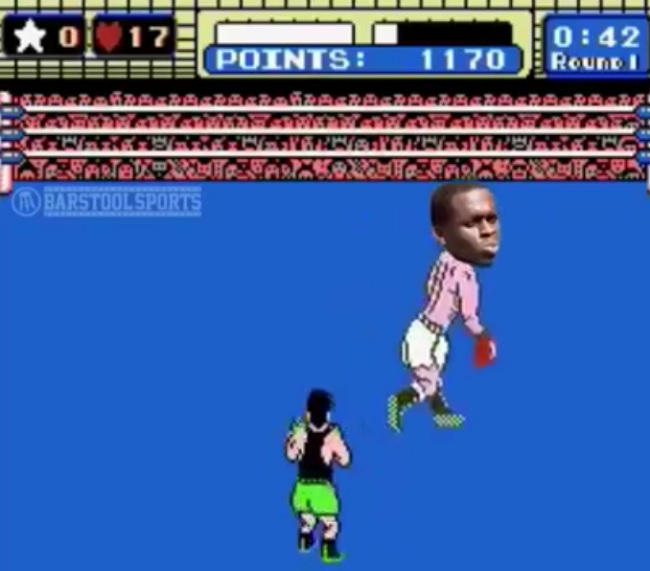 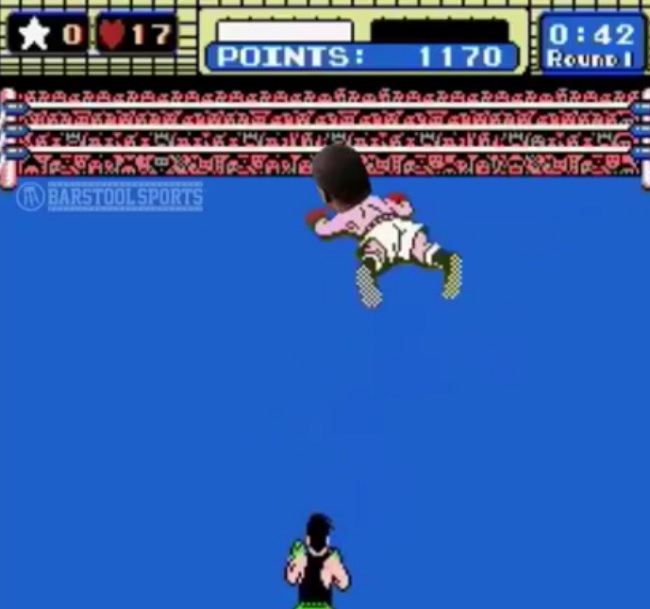 Just like that, everything Glass Geno, erm, Smith had been working for this entire time came to an end in 42 seconds. One punch by Lil Mac brought him down for good.

Hours after the fight, Smith tweeted out a message to everyone. He told his followers that he was still confident that his boxing career would be a success. This was accompanied by a new selfie of his.

Smith was immediately arrested for being a self-absorbed moron.