He couldn't believe what happened. He was away for one day, and it was all in ruin. His store, the endeavor he had sunk most of his life savings into, was completely debacled.

Joseph didn't know what to do. His caviar and piano business was booming prior to his vacation, but despite his father minding the store the previous day, it was broken into, and all of his wares were stolen.

His friend overheard Joseph's pitiful sobs and came over to console him.

"Sorry Joseph, I know you loved selling caviar and pianos," he said. "My store was broken into as well. Damn protestors. They want to make sure their point gets across, but they don't care about public property. They also poop and pee everywhere, it's f***ing disgusting."

"Oh, so that's what that smell is," Joseph replied. "What were they protesting this time? Something about wanting to kill cops who shoot criminals?"

"No, not this time," the friend responded. "Something about celery stalks getting equal rights by having celery stalk-only bathrooms available to them."

"Celery stalk-only bathrooms?" Joseph asked, scratching his head. "Why the hell do people pretending to dress as celery stalks need their own bathroom?"

Joseph's friend began to reply, but was stopped by the sound of rummaging in the background. Someone emerged from the dumpster. He was wearing a designer shirt and sported an expensive watch on his wrist. In fact, if it wasn't for the banana peel on his head, Joseph and his friend would've assumed that he was a trust-fund kid from the valley.

"Uhh... God bless you?" Joseph replied with a confused tone.

Joseph and his friend couldn't help but laugh.

Joseph nodded in agreement. "This has to be the stupidest thing I've ever heard. Now, if you'll excuse me, I'm going to contact the police to get to the bottom of who stole all my caviar and pianos."

"Blogaflogafloos!" the young man shrieked. "You two are ignorant! You probably don't even think that the government should pay for my college education, even though I should have known that I wouldn't be able to land a job after majoring in the history of salsa dancing!" Joseph and his friend exchanged another chuckle.

"Hey kid, how about you, I don't know, actually study something relevant and work hard so that you can get a job and pay off your loan?" Joseph's friend asked.

The young man wouldn't hear it. He pulled down his pants and began defecating all over the sidewalk.

Suddenly, something metallic plopped out of the young man's buttocks. It resembled a gun!

"Whoa, whoa, whoa!" Joseph gasped. "Come on, you don't have to be violent. I thought you people were anti-guns!"

"Gun? Ha! This is no gun!" the young man spat. "Not a regular gun, anyway. But I will use it to defeat the likes of you!"

He pulled the trigger. At first nothing happened, and Joseph and his friend felt a sense of relief. But then they came. Blue and green fabrics spewed out of the gun. Except they weren't any sort of material. They were butterflies!

The butterflies swarmed Joseph and his friend. They landed on their skin, and soon enough, the two men felt their skin being penetrated. The stingers didn't hurt much at first, but by the time the blood and puss spewed out of their bodies, they were dead.

"Blogaflogafloos..." the young man hissed, returning to his dumpster.

Emmitt didn't want to sleep after he was stung by that butterfly. He sped down the freeway instead, completely aware of what he had to do. It took him 16 hours, but he finally reached his destination: Eric Mangini's house.

"Eric Mangina and Shannon Shark probably know what going on," Emmitt said aloud as he approached the front door. Emmitt rang the doorbell, and a brunette woman wearing a blue sweater opened the door instantly, almost as if she had been waiting there.

"You must be one of Eric's friends," she said, warmly. "Come inside, he's waiting for you."

Waiting for me? Emmitt thought, as he ascended the stairs. Had he and Shannon already heard about the news? And why do they call it news if you heard it before? Shouldn't it be called olds?

The brunette woman led Emmitt into a room, where he saw his former compatriots, Eric Mangini and Shannon Sharpe, sitting by the TV. Mangini had some sort of video game controller in his hand. Sharpe stared at the television, absent-mindedly.

"Emmitt, you made it!" Mangini yelped, springing up from his chair. "Finally! A cool guest! Shannon is a bit of a drag. He's just watching me play video games."

Emmitt was confused. "What do you mean lumber party?" he asked. "Lumber another name for wood, what is a wood party? What are a wood party? Are? Is?"

"Slumber party," Mangini corrected him. "I sent you the invite on Facebook. I guess you didn't get it if you don't know about it. See, Shannon, I told you there was a reason no one came tonight. Our Facebook invites got lost in the mail!"

"Shut up, Shannon, you don't know anything," Mangini snapped. "So, Emmitt, you might as well sleep over since you're here. Hey, Ma, get Emmitt some macaroni and cheese, pronto, and give me some more! Anyway, Emmitt, what are you doing here if you didn't come for my awesome slumber party?"

"Guys, you never gonna belief what happens," Emmitt said. "I was sitting in my car and a flybutter land on my arm. And then he sting me!"

"You mean butterfly?" Mangini asked, suddenly looking disinterested. "Who the hell cares if a butterfly stung you?"

Emmitt brandished the paper from his pocket - his quote about Muhammad Ali following his hero's death: 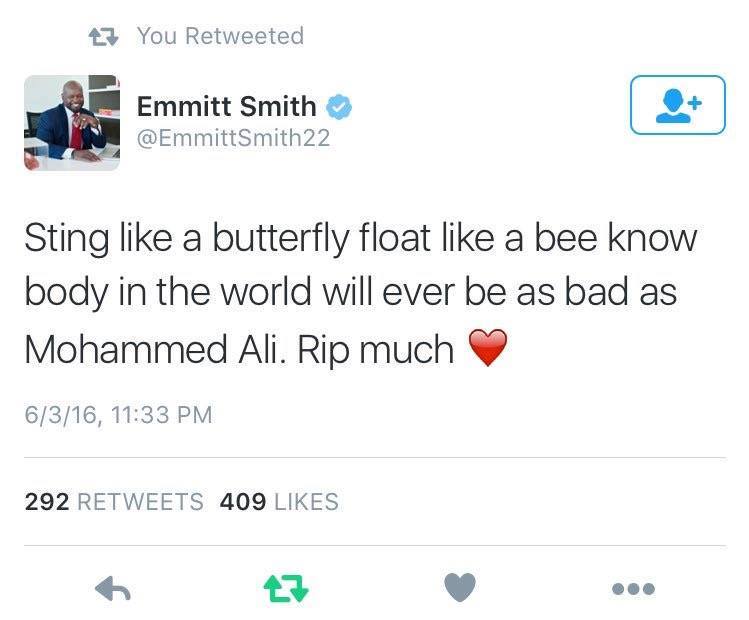 Mangini grabbed the paper and read the quote to himself several times. Sharpe tried to take a look, but Mangini intentionally angled it away from his "friend" so he couldn't see it.

"Not yet, Shannon, I'm not done!" Mangini spat. "I don't know what to make of this, Emmitt. On one hand, you might suddenly be a prophet. On the other hand, I don't really care because I'm in the middle of this awesome slumber party."

"Guys, this very important, I can feel it in my bone," Emmitt said. "I think it might has to do with the undisappearance of Dianna Mariana Russia."

"Oh, her," Mangini said, sounding as though he wanted to throw up. "She ruined my chance to get Erin Andrews to be my girlfriend. When we got back from North Korea, I called Erin Andrews on Skype to be my girlfriend, and she didn't answer. I called 716 times, but she didn't answer. Probably because she saw me on TV with Dianna and thought that I was taken. I just want her to pick up once so I can explain to her what happened and then ask her to go steady with me."

"Shut up, Shannon, I definitely have a chance with her!" Mangini chirped back. "Anyway, Emmitt, I'm afraid we won't be able to help you on this adventure. Even if my future relationship with Erin Andrews wasn't at risk, Shannon and I have some special slumber parties to plan in the future. You're always welcome here for them, so hopefully the Facebook invites don't get lost in the mail again!"

Mangini then focused his attention toward his door and slammed his fist down on the table.

"Ma, where's my macaroni and cheese!? I've only had five bowls tonight and I'm hungry!"