If you're waiting for me to complain about the Browns loss, I won't disappoint you. It was horrible. Cleveland led 20-17 in the fourth quarter as eight-point underdogs and ended up with more yardage and a higher yards-per-play mark than the Redskins, but blew it because of "three" turnovers. I put that in quotes because the Duke Johnson fumble was recovered by Cleveland, yet was inexplicably was awarded to the Redskins: 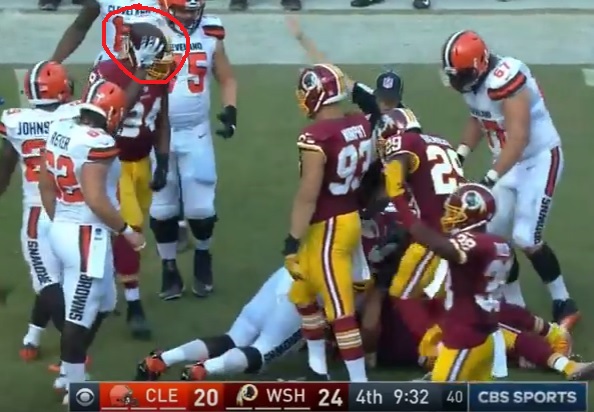 I'm going to rant more about this in my NFL Power Rankings. However, I'd be foolish not to admit that I lucked out with my Saints selection. I'd rather have a correct five-unit selection than a four-unit one, but still, I'm not going to pretend that I didn't luck out.

What I do want to discuss is my horrible decision-making. I actually went 3-2 on my top plays (and thus, the Supercontest), but I lost money because I got all of my two-unit picks wrong. They were just awful picks I didn't feel too strongly about. I just got too cocky coming off my best start ever. The late selection of the Patriots was especially brutal. There's no excuse for that, but I will try to be smarter going forward.

ARIZONA OFFENSE: I was surprised the books posted such an early spread considering Carson Palmer's status. Palmer sustained a concussion against the Rams and looked like he was pretty out of it when talking to the trainers on the sideline. He was taken into the locker room, but Bruce Arians expressed optimism about Palmer's Week 5 status. Arizona's actions spoke otherwise, however, as the team added a quarterback off the practice squad.

It appears likely that Drew Stanton will start. He won't have the most difficult matchup, as his three dynamic receivers should be able to get open against some horrible 49er cornerbacks. It's way more of a question if Stanton will be able to get them the ball. Stanton was horrid in the preseason, and I thought the Cardinals should've rostered Matt Barkley instead, as Barkley was the far superior quarterback in the exhibition contests.

Fortunately for Stanton, he may not have to do much, as the 49ers' run defense is shot right now in the wake of NaVorro Bowman's Achilles tear. San Francisco held the lead against Dallas in the third quarter, but once Bowman was knocked out, the flood gates opened, and the 49ers couldn't stop Elliott whatsoever. David Johnson is another elite back who won't be contained.

SAN FRANCISCO OFFENSE: There are cries for Colin Kaepernick to start, but the malnourished backup is hardly a good option; in fact, around this time this year, Kaepernick opened with two pick-sixes against the Cardinals in a blowout loss. Kaepernick is 20 pounds underweight because of the same horrible diet that derailed Arian Foster's career, and he had been regressing prior to being benched in favor of Blaine Gabbert last year because he couldn't read defenses or refrained from studying film. I doubt anything has changed.

Gabbert, unfortunately, is the best option. He's the smarter quarterback, but he is also way more craven. Gabbert doesn't take shots downfield too often, and when he does, he heaves ugly wobblers that are intercepted, and then Chip Kelly says that was Gabbert's only poor throw, ignoring all of the short tosses that don't make it past the first-down marker on third down. Expect more of this, as Arizona's pass rush will make it so Gabbert has to hurry his passes even more.

The 49ers will have to do all of their damage on the ground, whether it's Gabbert scrambling a bit or Carlos Hyde pounding the rock. There's definitely some hope for Hyde, as LeSean McCoy tallied 110 yards on 17 carries versus Arizona in Week 3.

RECAP: This is going to be one ugly game. It'll be a defensive struggle, but only because both offenses are in horrible shape. I feel like the most likely result is Arizona winning by three points, so I could see this going either way (or no way at -3) in terms of the spread. Considering the ridiculous amount of action on the Cardinals, I'm inclined to take a shot with the 49ers, though the last thing I want is to bet this abomination of a football game.

I'll be posting NFL Picks all day Tuesday. Follow me at @walterfootball for updates.

THURSDAY THOUGHTS: I'll have final thoughts later tonight, but I have to mention that I have such disinterest in this game that I thought I was taking the Cardinals on the podcast. Yeah, that's bad. I actually considered a unit when this line was +4. The sharps bet it down to +3.5, but they haven't touched this game since.

FINAL THOUGHTS: I mentioned earlier that the sharps haven't been taking 49ers +3.5. With all of the public action coming in on the Cardinals, that line couldn't be sustained, so it's risen to either -4 or -3.5 -115. There's more value with the 49ers now, and I thought about biting for a unit - or even half of a unit - at +4, but then I realized that I was going to be betting on the worst team in football, and I almost threw up in my mouth. No thanks. I'll pass on this game.

Many people are betting the Cardinals.

Those teams went 2-2 ATS, bringing the overall record this season to 5-13. Crazy, right? The books are having a huge year thus far, though they lost big time with the Broncos covering at Buccaneers.

Here are the four highest-bet teams this week, as of Tuesday morning:

New England is on track to be the highest-bet game of the year, and all of the action is pouring in on the Patriots. There might just be some bodies buried in the desert if the Patriots cover!

MIAMI OFFENSE: The Dolphins are 1-3 right now, but they do get some good news, as it's possible that stud center Mike Pouncey could return this week. The offensive line has been a train wreck with Pouncey and Branden Albert out. There's no word on Albert's return, but having both blockers on the field again would allow the Dolphins to sit some of their struggling linemen, namely Billy Turner and Ja'Wuan James.

Pouncey will obviously allow Ryan Tannehill to have more time in the pocket, which is needed against Tennessee's fierce pass rush. His presence will give the Dolphins a legitimate shot at blocking Jurrell Casey, though Albert will be needed to deal with Brian Orakpo. It's also possible that neither Pouncey nor Albert will be 100 percent if they suit up, so it's more likely than not that the Titans will win in the trenches and consequently pressure Tannehill and put the clamps on all of Miami's pedestrian running backs.

The one advantage the Dolphins have on this side of the ball is in the passing game. Jarvis Landry and DeVante Parker own a big edge over Tennessee's struggling secondary, which had major issues versus Houston's receivers last week. Brock Osweiler doesn't have the best blocking unit either, and while he wasn't consistent, he was able to connect with his wideouts on some big gains. Tannehill figures to have a similar output.

TENNESSEE OFFENSE: The strength of Miami's defense seems to match up well with the focal point of the Titans' scoring attack. Tennessee has run the ball extremely well with DeMarco Murray, who has revived himself after being used incorrectly under Chip Kelly. The Dolphins have a monstrous defensive front, however, which figures to thwart Murray. They clamped down on Jeremy Hill last Thursday night, and while Murray is a much better player, they'll make it difficult for him to find much room.

Marcus Mariota will have more pressure on his shoulders to move the chains in this contest. He was incapable of doing so at Houston, struggling with accuracy and mechanics. However, the Texans have a much better secondary than the Dolphins possess. Miami can't cover anyone, as evidenced Thursday night. Mariota has played well at times in the past - most recently, he went 25-of-33 for 238 yards, two touchdowns and an interception at Detroit - so I don't see why he couldn't repeat that sort of performance.

The Dolphins stand no chance of covering Delanie Walker and Mariota's other weapons, so they'll need to apply heavy pressure on the second-year quarterback. Though Miami has a great pass rush, it figures to be somewhat stymied, as the Titans have a stalwart blocking unit that should keep Mariota clean for the most part.

RECAP: I don't understand why the Dolphins are favored by more than a field goal, especially when it's clear that they have no homefield advantage. It's perhaps worth a point, maybe, so this is saying that Miami is 2.5 points better than Tennessee, which is hardly the case. In fact, I have the Titans as the better team in my NFL Power Rankings.

I discussed the Titans being underrated above. They've been in every game thus far. They led the Vikings in the third quarter. They had a chance to tie the Raiders at the end. They were squared at 20 versus the Texans at the end of the third quarter before the punt return. Mariota has struggled, sure, but Tennessee's ability to win in the trenches gives them a shot to win most games, including this one. And considering the competition, I expect Mariota to be better in this contest. The Dolphins, meanwhile, have battled a tough slate, losing at Seattle, New England and Cincinnati, but two of those games were blowouts.

The Dolphins have no business being favored by 3.5. I'm all over the Titans, and I'll be taking them for four units. If it's announced that Pouncey and Albert won't be able to make it back, I'll put a fifth unit on this game.

THURSDAY THOUGHTS: I've heard some talk that this game might be moved to Tennessee because of Hurricane Matthew, but it looks like the weather will clear up by Sunday. Still, this has to bode well for the Titans, as the Dolphins have to be concerned about their homes and families during this storm, so I doubt they're focusing much on the Titans.

FINAL THOUGHTS: Wow. This line has plummeted through -3, as the books are not afraid of a middle at all. This is a great sign for the Titans. Unfortunately, I'm getting a horrible line of +3 -115 at Bovada. It's +2.5 elsewhere.


The Vegas. Edge: Dolphins.
A slight lean on the underdog.