If you've followed this site for a while, you may know that I like to respond to my spam mails. It's fun to mess with these a**hole spammers, and besides, if they're busy contacting me, they're not taking advantage of someone who's naive, so I feel like I'm being a good Samaritan.

Last year, I replied to some Muslim woman named Reema or Nazila, or whatever. After the season was over, I stopped answering. Well, it's time to make amends for that... 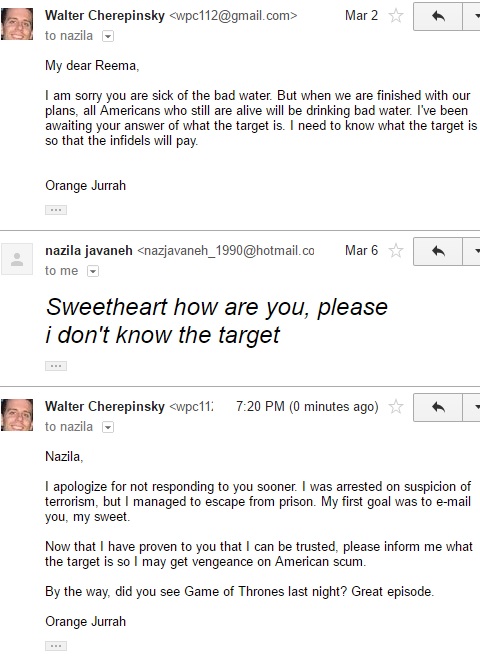 She has to surrender the target now, right? I've proven I'm willing to blow up Americans because I went to prison, for crying out loud!


Nazila actually responded despite the long wait in between e-mails! Unfortunately, it wasn't much of a reply: 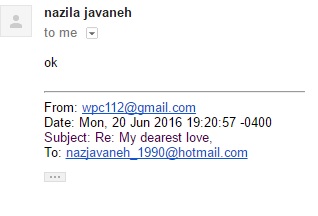 Weird. Why would "she" even answer? Don't tell me "she" is actually pissed? I went to prison, for crying out loud!

Fortunately, I found a way to have fun with this:

Hopefully two things happen: One, she actually responds with a good e-mail. And two, America's counter-terrorist agencies don't start focusing on targets in Oklahoma as a consequence of this e-mail.


I heard back from Nazila, but she was once again oddly distant. Whereas her previous e-mails were very engaging, she's now giving me one-line responses, which is strange considering that "she" is a douche-bag spammer:

The good news is that this provides a golden opportunity for me: 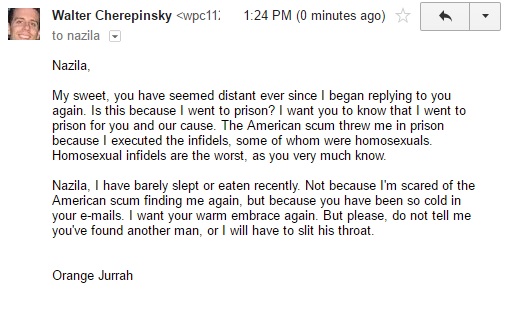 I hoped this would put me on track to troll "her" some more, but she didn't respond...


I recently received an e-mail from someone named John Cliff. Sounds like some kind of action hero - someone Jason Statham would play. He's a man on a mission. A man who has to kill thousands of people all by himself. He's... John Cliff!

Anyway, I decided to answer this John Cliff. 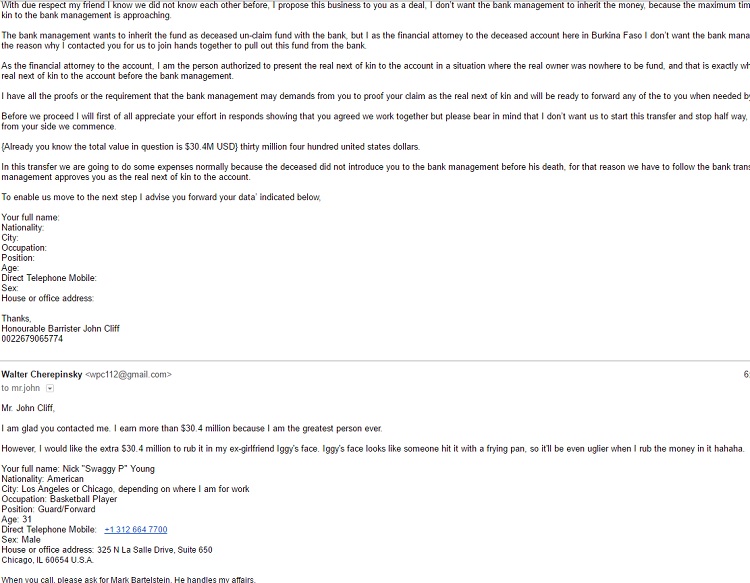 I chose Swaggy P. because he annoys the hell out of me. No one ever cared about him and his ex-boyfriend Iggy the Koopa Kid, so why did he ever think he was famous? I don't get it.


So, action hero John Cliff e-mailed me back. Unfortunately, he addressed me as Walter Cherepinsky, which simply cannot happen. He also said he couldn't reach me on the number I gave him. Let's set him straight: 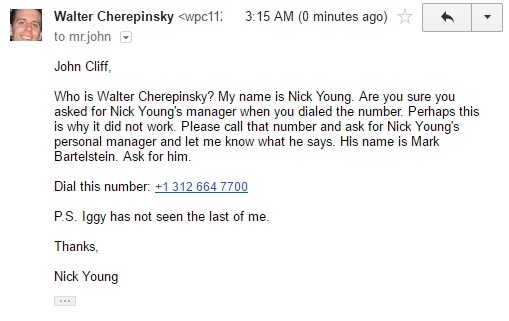 Man, I wish I could see Bartelstein's reaction when this guy tries talking to him on the phone.

Nick Young's agent didn't pick up the phone, apparently. How do I know? Because action-hero Mr. John Cliff told me: 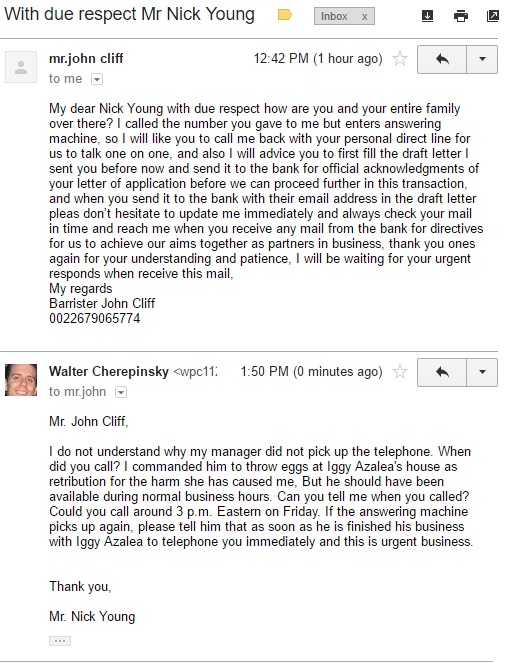 Again, I would pay to see the reaction on the agent's face, especially if he hears a message about taking care of Iggy Azalea. 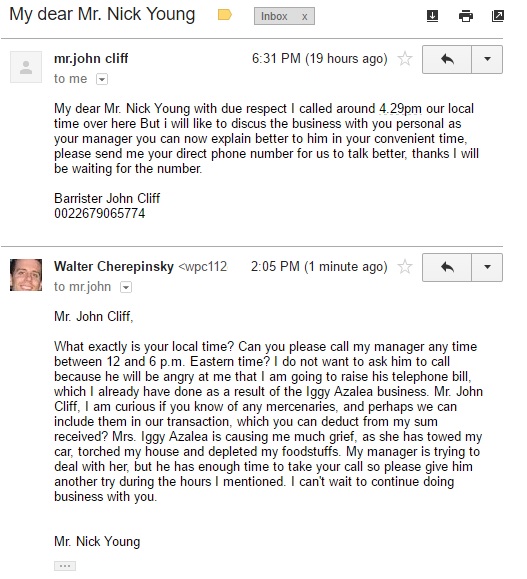 John Cliff responded to me, calling me his "good brother," whatever the hell that means: I would literally pay to see Nick Young's agent's reaction to hearing about Iggy Azalea needing to be eliminated.


I've been getting lots of weird messages on Facebook lately. Weird a**holes using pictures of hot chicks have added me as friends recently. They've sent countless messages to me, saying that they want to meet me and love me, and whatever. This is obviously a scam, so let's f*** with them!

Here's one example. This girl is apparently named Carol Dave. This is what "she" looks like: Looks hot, but too bad she's not real. But anyway, what the hell kind of a last name is Dave? And I wonder if I can convince her to name our kids Dave Dave? First things first... 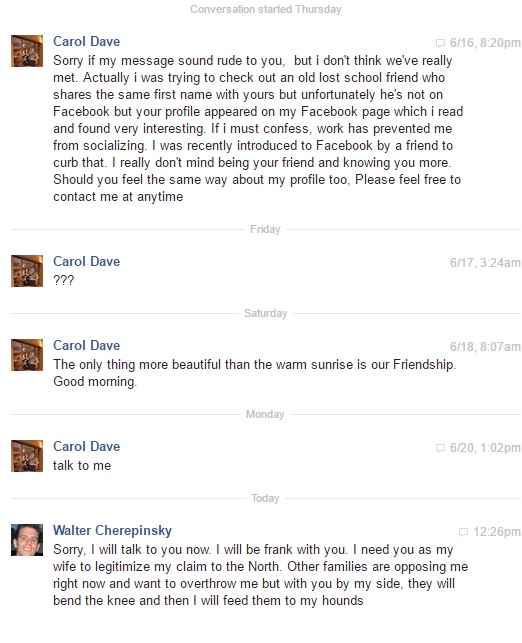 I wonder if she'll fall for a sadistic prick like Ramsay Bolton. I hope she responds, since this exchange seems like it could be a lot of fun.


I was glad to see Carol Dave message me back... 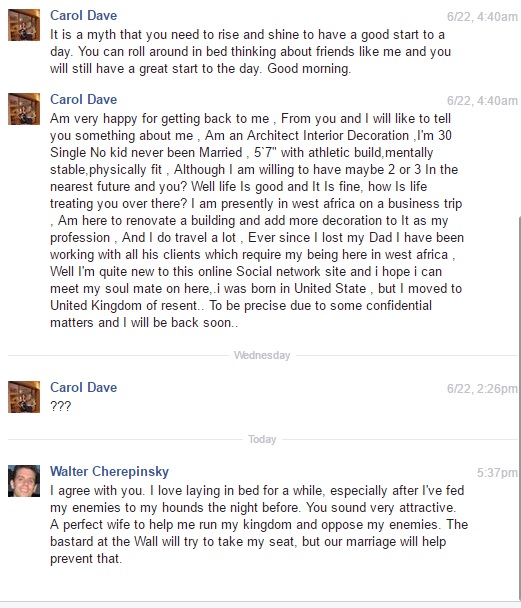 I have no idea what she's talking about in terms of clients in West Africa, and I'm beginning to wonder if she'd be hesitant to get married to me because she'd have to move to a much colder climate.

I noticed that Carol Dave saw my message but didn't respond for a couple of days. I thought I lost "her," but then saw that she replied one morning: This almost has to be the last time she contacts me, right? I flat out said that I stabbed my dad and fed my younger brother to the hounds! How can anyone continue talking to me after hearing that!?

Apparently, I was wrong. Saying that I stabbed my father and fed my baby brother to the hounds wasn't enough to keep Carol Dave away because "she" replied to me: The only way this can possibly backfire if she actually takes me up on that offer and forces me to do all of those things to her ex.

OK, so it's apparent that Carol Dave is not actually reading my replies; otherwise, "she" would have been too weirded out already: WTF is Carol Dave saying? First of all, she didn't send me an e-mail; she sent me a Facebook message. And second, twin-soul? What the hell is that?

All right, if "she" actually answers this, then we'll know for sure that "she" isn't reading this at all.

OK, so it's now clear that Carol Dave doesn't read my replies. It doesn't matter to "her" that I killed my father and baby brother, so I'm going to keep making my responses worse and worse. Here's our latest exchange, where I tell her that I'm basically going to burn and rape her: There it is. That's how Ramsay Bolton keeps his "wits about him," whatever the hell that means.

Hey, guess what? Carol Dave is now asking for money. What a surprise! Take a look: I didn't get to answer for 24 hours, so naturally, the person pretending to be Carol Dave sent a couple more messages: 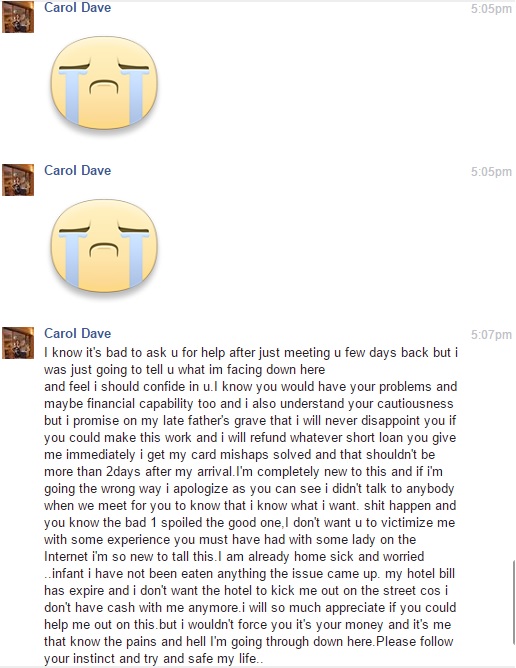 People ask me why I reply to these spammers, and this is a perfect example why. These spammers are absolutely evil. Whoever is pretending to be Carol Dave is banking on taking advantage of someone else's pity in order to steal money from them. It's disgusting, really, as there are individuals out there who are gullible and believe this (otherwise, this would not be a thing). If I ever happened to meet one of these spammers, I would take a real sword I have and slice off their head. I'm not joking.

Unfortunately, I can't do that. I can waste their time, though, which might keep someone gullible from being taken advantage of:

I would actually pay someone to send a real-life raven to whatever location she gives me. I think I'd attach a couple of $100 in Monopoly money to it.

Carol Dave has now sent me details on where to send the payment, once again failing to read my message. OK, I'm going to make sure "she" actually reads it this time by asking "her" something specific before I actually send my raven:

Carol Dave has to read this response, right? To make sure I actually send "her" the money? I wonder if she'll agree to rape and flay with me!