It sucks to have taken such a big loss, but I've said that there's no such thing as a bad week if you learn something. I wrote this in the final thoughts of my Saints-Eagles selection, but I discovered how important it is to have great coaches with extra time to prepare versus inferior coaches. Last weekend, the Chiefs, Rams and Patriots had big-time coaching advantages, and thus, all three covered the spread, with the Chiefs and Patriots doing so very easily. In the fourth game, Sean Payton and Doug Pederson were close, which could explain why that game could've gone either way.

It was dumb of me not to factor this in prior to Week 19, but I'm going to incorporate it into my handicapping for next year's playoffs.

My Week 20 NFL Picks will be posted all day Tuesday. Follow @walterfootball for updates.

My overrated-underrated feature was posted in this spot the past couple of years. I thought it would be better if there was less clutter on this page, so I set up a new NFL Overrated and Underrated Teams page that will be updated every Monday. I have three overrated and underrated teams listed there, and some may shock you!

There's no Vegas update, as there were no publicly backed sides last week, and there aren't any this week either.

HATE MAIL: I will be posting hate mail here. However, let's lead off with a compliment:

Why, thank you! I never thought someone would be so kind to me following an eight-unit loss.

Here's someone who wasn't as kind:

I wrote this before, and I'll say it again: Don't post something on the Internet that can be easily disproven via a quick search.

Here's something I didn't even have to reply to: 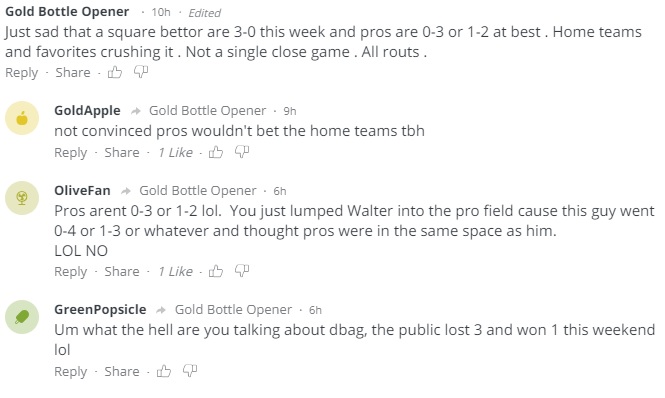 Again, this is another instance where a quick search can quickly prove someone wrong. The sharps took it up the a** in Week 19, as they bet heavily on the Colts and Chargers. Remember, even the best bettors in the world hit only 57 percent or so of their picks, so an 0-2 result shouldn't be too much of a surprise.

That's so cool that this guy gets it. I had the right side for sure!

OK, yeah, obviously not. But this is another instance of someone not doing their research. This is a PSA: People, don't be stupid and lazy. If you post something on the Internet, do your research first so you don't look like a jacka**!

This is pure genius: 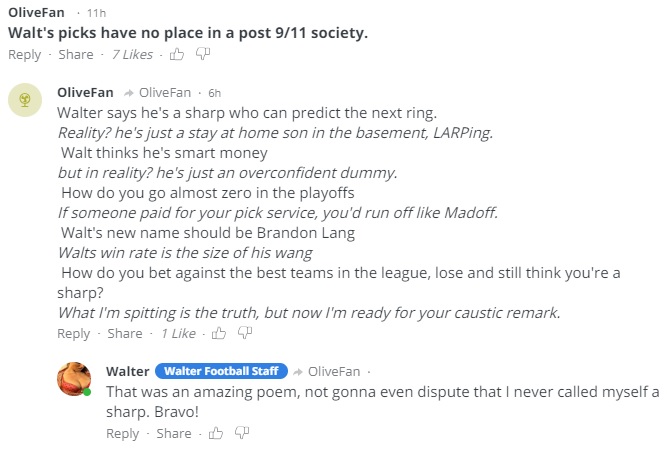 I have no snarky response to that even though I've never said I'm a sharp. I hope to be a sharp one day, but I have much to learn. One thing I will never be, however, is a terrific poet like this man.

LOS ANGELES OFFENSE: The Saints suffered a major injury in the divisional round of the playoffs when defensive tackle Sheldon Rankins tore his Achilles. Rankins was the best player at his position on the team. Excellent as both a run-stopper and a pass-rusher, Rankins will sorely be missed, and his absence could have a major impact on this game.

The Saints come into this contest ranked sixth in DVOA run defense. They've been excellent at stopping the rush, even limiting Todd Gurley in the first meeting. They restricted Gurley to just 68 rushing yards on 13 carries. Things might be different this time, however. It remains to be seen how Rankins' injury affects the Saints' ability to stop the run. We just saw Gurley and C.J. Anderson trample a supposedly great Dallas run defense, so it shouldn't be surprising if Gurley has a better performance than he did back in Week 9.

While the Rams' ground attack figures to be better in the rematch, the other major aspect of Los Angeles' scoring unit figures to be worse than it was in the first meeting. That would be Jared Goff's passing ability. Goff struggled in the early going of the Week 9 battle, but led a roaring comeback. He ultimately finished 28-of-40 for 391 yards, three touchdowns and an interception. Though the Saints are weaker against the pass than the run, I can say for sure that Goff won't have as much success this time. That's because of Cooper Kupp's absence. Kupp is Goff's favorite receiver, so it's no surprise that Goff has been substantially worse without Kupp, who had a big game in New Orleans, catching five balls for 89 yards and a touchdown. Here's the breakdown of how Goff has performed with and without Kupp this year:

Goff has played on an MVP level with Kupp, and he's been a mediocre starter without him. Granted, there are other factors involved, but this is an indication that Goff won't be as potent in the rematch between these teams.

NEW ORLEANS OFFENSE: While the Saints are - or at least, were - terrific at stopping the run, the Rams have struggled in that regard for most of the season. They rank 28th in DVOA rush defense. They surrendered a combined 115 rushing yards to Alvin Kamara and Mark Ingram back in Week 9. The Rams were able to bottle up Ezekiel Elliott last week, but if you think they're going to have a repeat performance in New Orleans, I have two words for you: Drew Brees.

It's easy to stop the run if you don't have to worry about an opponent's passing attack. Dak Prescott is a pedestrian quarterback who has just one weapon and happens to be coached extremely poorly. The Rams didn't have to respect Dallas' aerial assault, allowing them to concentrate on limiting Elliott's ability to find running lanes. It won't be as easy with the Rams having to worry about Brees bombarding them with deep passes. Brees was merciless against the Rams in Week 9, going 25-of-36 for 346 yards, four touchdowns and no interceptions.

That said, Brees will find it more difficult to throw on the Rams in the rematch because of Aqib Talib's presence. Talib didn't play in the first meeting, which allowed Michael Thomas to go nuts. Thomas had his best game of the year, catching 12 passes for 211 yards and a touchdown. His score was the one in which he honored Joe Horn by "finding" a cell phone under the goal post. Thomas' numbers won't be nearly as potent with Talib shadowing him. Brees will have to look elsewhere, so it's a good thing he'll have Ted Ginn at his disposal; Ginn wasn't around for the first matchup either. I also expect lots of Kamara as a receiver out of the backfield, as he has a big edge against the Rams' mediocre linebackers.

RECAP: I liked the Saints at -3, but the sharps jumped on New Orleans and brought the spread up to -3.5. That line doesn't seem nearly as tempting. The most likely result of this game - or any instance where the host is favored by 3.5 - is the home team winning by exactly three points. I could see a scenario where the Saints are up 10, only to allow Goff to throw a back-door touchdown in the final minutes.

I think that's a very realistic scenario, as this figures to be a close game. The Saints' offense won't be as potent this time with Talib back on the field, while the Rams will be better at running and worse at passing, thanks to injuries to Rankins and Goff. Los Angeles will definitely be in position to cover and perhaps even win outright.

THURSDAY THOUGHTS: This line has dropped to -3 -120 at Bookmaker (CRIS), BetUS and 5Dimes. I think that's worth locking in if you like the Saints. The juice could drop again, but you'll feel bad if the juice rises back to what it was before. Again, I'd want to make sure I absolutely had -3 when betting this game because Saints by three is the most likely result. I'm going to put a unit on New Orleans and lock it in at -3 -120.

FINAL THOUGHTS: This line is -3 -115 in most books. Bookmaker has -3 -110 listed, so I'm going to be penalized 0.1 units if the Saints don't cover. That's not a huge deal because this is a one-unit play. I'm also fine with locking in -3 -120 because losing out on a reasonable -3 would've been worse. Regardless, I like the Saints the slightest bit in this game, though I think the host winning by three is the most likely result. I'd like New Orleans more if it had Sheldon Rankins available, but he's injured. The sharps and public are both split on this game.

The Psychology. Edge: None.
No edge found.