The Adventures of Tom Brady's Haircuts is back for a second season! As with everything else though, I'm moving it to its own separate page. See what's going on this week with this picture here: 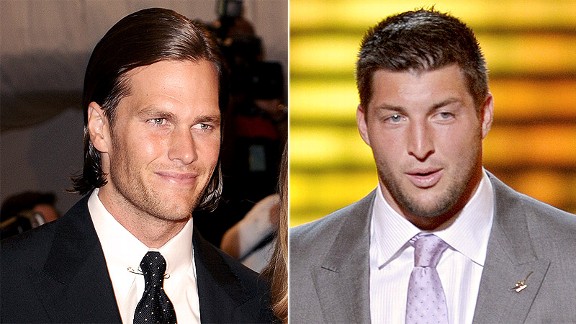 ARIZONA OFFENSE: The Cardinals dodged a huge bullet when it was announced that Larry Fitzgerald passed his baseline concussion tests on Monday. Fitzgerald will almost certainly suit up, which is a huge relief for Arizona, which couldn't possibly go into this contest with Michael Floyd as its only viable receiver against Seattle's dominant secondary.

Carson Palmer will need Fitzgerald as a downfield target considering the amount of pressure he'll face in this contest. Palmer took a ridiculous seven sacks from the Seahawks in the Thursday night meeting between these teams back in Week 7. However, in the past four weeks, there has only been one game in which Arizona surrendered more than two sacks. Bruce Arians has done a great job of improving his team's protection schemes, so Palmer definitely won't be harassed as much by Seattle's devastating pass rush.

One other thing that will be different in this rematch is Arizona's usage of Andre Ellington. The speedy rookie was barely a factor back in Week 7, as he was given just five touches. He's still underutilized - for the love of God, please stop giving Rashard Mendenhall carries, Bruce - but Ellington will be a much bigger part of the offense this time, which is obviously a good thing because he can go the distance on any play.

SEATTLE OFFENSE: One of my programmers lamented having Marshawn Lynch in his fantasy championship this week because of the matchup. I'd feel the same way if I were in his position. The Cardinals have the No. 2 ground defense in the NFL. They haven't allowed more than 83 yards on the ground to any opponent since Week 7, which, coincidentally, was against the Seahawks.

Does this mean Lynch will be in full Beast Mode again and exceed that 83-yard barrier? It's certainly possible. Lynch's 91-yard total from Week 7 was no fluke; he was pummeling defenders and brushing off tackles with ease. Lynch is matchup-proof because he's just so talented.

Of course, Russell Wilson plays a major factor in that. Wilson was 18-of-29 for 235 yards and three touchdowns in the previous victory over Arizona, and he didn't even have either of his tackles blocking for him. As a result, Wilson was constantly under siege by a ferocious Arizona pass rush. The Cardinals will still put a ton of heat on Wilson, but he will do what he does best - buy himself time in the pocket and make big plays.

RECAP: If this were a normal game in October, I'd take Seattle, no questions asked. The Seahawks are just so dominant at home. They're also the better team, so there'd be no reason for them not to cover the spread.

However, this game will be played under highly irregular circumstances. The Seahawks won't have any motivation; they've essentially locked everything up, so a victory over an opponent they;ve already demolished will mean nothing. The Cardinals, meanwhile, absolutely have to win this game to stay alive in the playoff hunt. This means everything to them.

For those who still have doubts, this contest reminds me of the Week 17 Seattle-St. Louis game last year. The Seahawks barely had anything to play for, yet they were favored at home by double digits over a divisional opponent. They won, but only by seven points. The Rams covered, and I believe the same fate is in store for Arizona.

FINAL THOUGHTS: There's a bit of sharp action on the Cardinals, but nothing substantial. I'm dropping them to one unit though. Facebook friend Chris W. brought up a good point: "Worth mentioning, Pete Carroll is an insufferable douche bag and may attempt to run up the score just to spite the Cardinals... then take week 17 off. Still like Arz's spot though, just not for $."

SUNDAY NOTES: This spread has dropped to +9, or even +8 at CRIS. The sharps like the Cardinals.

The Seahawks essentially have everything locked up. Arizona needs to win this game.