I've been citing that Tom Brady has lost his "clutch" ability over the past few years, but I guess I can't do that any longer because he just won his fourth Super Bowl. Or, can I...? Brady, after all, reached the "Big Game" with the help of his deflated footballs.

Brady was stuck on three Super Bowls for a long time before he resorted to cheating. So, what happened? The obvious answer is his wife. But more specifically, it's the haircuts that his wife forces him into getting. It's unknown to the media, but Brady's haircuts are much more than just silly fashion statements; each haircut gives Brady a new persona. Including this one... 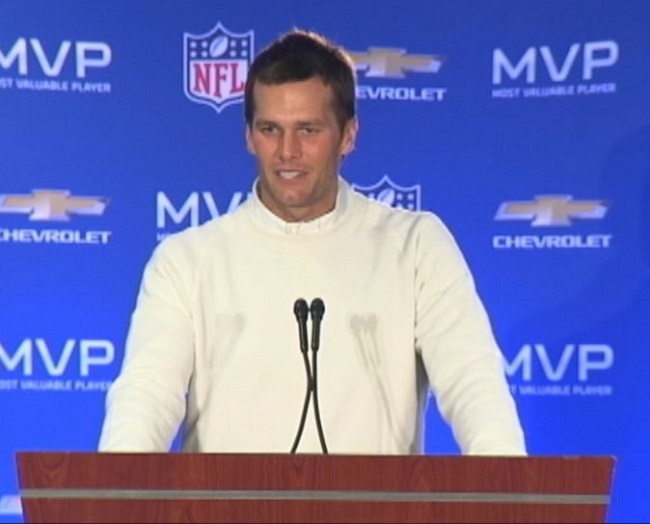 SEATTLE OFFENSE: I can't remember who said it, but someone on ESPN asked whether anyone could have success running the ball for the Seahawks. Typical ESPN nonsense. Oh, sure, we never heard of Thomas Rawls two months ago, so anyone can thrive in Seattle's backfield!

Rawls was very important to the team. He was actually an upgrade over Marshawn Lynch, who was hobbled when he was on the field. DuJuan Harris struggled as a replacement last week, and the newly signed Bryce Brown won't fare any better for the most part. This contest might be an exception, given how poor the Browns are versus the run, but overall, I don't see the Seahawks moving the chains on the ground successfully until Lynch returns.

Of course, the Seahawks will still score points because Russell Wilson is on fire. Wilson has been the hottest quarterback in the NFL recently, thanks to the adjustments made on the offensive line. There's a chance the Browns could slow him down a bit because their pass rush just accumulated nine sacks in a single game, but with Joe Haden out, the Browns don't have anyone overly imposing in their secondary, outside of Tashaun Gipson, who hasn't even been that great this year.

CLEVELAND OFFENSE: Johnny Manziel showed up to the game sober last week, which was a plus, though he seemed intoxicated when he threw a dumb interception while rolling left and heaving the ball way late over the middle of the field. Manziel also took a sack for a safety that was negated by a penalty, but he had a mostly positive outing otherwise.

However, this was against the 49ers. Battling the Seahawks will be a completely different story, even if Kam Chancellor is out. Manziel won't have the help of a great rushing attack again. Isaiah Crowell gashed the 49ers, but he won't have the same luck versus a dominant Seattle ground defense. Thus, Manziel will be asked to make more plays, which could be disastrous.

The one hope the Browns have is Manziel connecting with Gary Barnidge a bunch of times. You'd think the Seahawks were great at defending tight ends, but they're actually not, so Barnidge could be poised for a big game.

RECAP: This is another spread that is way too high. The Seahawks don't have much success covering these monstrous numbers against bad teams. They're just 3-3 ATS the Wilson era as double-digit home favorites in non-divisional games, so it's not like they're a lock to cover.

In fact, I like the Browns for a unit here, as I think they'll hang around. The Seahawks are coming off two massive blowouts on the road, so I don't see them being focused, and I actually think their offense will slow down a bit because of the Rawls injury. The Browns won't win or anything, but they'll stay within two touchdowns.

WEDNESDAY THOUGHTS: This is a big favorite I won't be backing. The Seahawks signed Bryce Brown and Christine Michael, but that won't matter. Neither is even close to Rawls' talent level.

FINAL THOUGHTS: I can't see the Seahawks being up for this game, and I anticipate them sleepwalking through much of it. Seattle's a bit overvalued right now, given the running back situation, plus Kam Chancellor's status is unclear. This number is way too high, and wagering on favorites of 15 or more is generally not a good idea (38-50 ATS since 1989). Still, I can't bet more than one unit on Johnny Manziel against a good team.

SUNDAY NOTES: The public is pounding the Seahawks, but the sharps don't want anything to do with this game.

I'm surprised there's not more action on the Seahawks.