A brutal week like that is always a combination of horrible picks and bad luck. The horrible picks were Ravens -3 (Baltimore was way too banged up heading into the game to compete with Pittsburgh), Raiders +3 (I noted that Nick Mullens was better than I thought he was after watching all of his preseason snaps, but that was after I already locked in that selection) and Redskins -2.5 (Atlanta was more desperate, while Washington, like Baltimore, was also way too banged up to compete.)

There was bad luck, especially with Jets +3. New York outgained Miami by 120 net yards, and the Dolphins averaged a pathetic 3.1 yards per play (compared to 4.4 for the Jets.) The Dolphins' offense scored just three points, as the other 10 came off Sam Darnold turnovers. Also, Broncos -2.5 was a byproduct of bad luck as well, as Denver lost its best offensive lineman, center Matt Paradis, to an injury. The Broncos couldn't block the Texans with Paradis out.

My other big play that lost, Buccaneers +6, was frustrating. I don't think it was a bad pick. Carolina is a team that is often aloof as big favorites, and it had a Thursday night game against the Steelers coming up. We've seen the Panthers be no-shows against the Giants and Redskins earlier this year, so I thought it was reasonable to expect them to be flat with an impending short work week. Unfortunately, they brought their "A" game for some reason against Tampa. Going with the Buccaneers there is a pick I'll always make, so that loss was unavoidable, unfortunately.

Week 9 sucked, but there's no such thing as a bad week if you learn something, and I feel like I picked up something valuable in regards to evaluating injury reports for teams with stacked injuries in one area, much like the Ravens had heading into the weekend. With two offensive linemen out, there was no way Baltimore was going to be able to block Pittsburgh. The Ravens ended up losing because they couldn't block.

My Week 10 NFL Picks will be posted all day Tuesday. Follow @walterfootball for updates.

PITTSBURGH OFFENSE: The Panthers may have suffocated the Buccaneers' offense until garbage time in the second half, but Ben Roethlisberger is no Ryan Fitzpatrick, especially at home. Roethlisberger has picked up his play as the season has progressed, and he should continue to perform at a high level in this matchup, as Carolina has an extreme weakness at cornerback.

I love Antonio Brown and JuJu Smith-Schuster in this matchup. The Panthers' secondary has struggled ever since getting rid of Josh Norman, and this is one of the best receiving duos they'll see all year. Meanwhile, Roethlisberger is very well protected, even though he didn't have right tackle Marcus Gilbert available last week. The Panthers don't have the most consistent pass rush, so Roethlisberger should have all the time he needs to locate his two dynamic receivers.

Meanwhile, James Conner has a tough matchup, as Carolina has an excellent front seven. However, Conner produced versus a tough Baltimore ground defense last week. Conner won't have one of his best games, but he'll pick up substantial yardage and perhaps score once or twice.

CAROLINA OFFENSE: The Panthers also figure to score often, as Pittsburgh's defense has some major problems that Norv Turner and Cam Newton will be able to exploit.

The weak point of Pittsburgh's defense is the linebacking corps, as Ryan Shazier continues to be missed. The Steelers can't defend pass-catching running backs or tight ends, which is something the Ravens lacked the personnel to take advantage of. The Panthers can certainly do so, however, as Christian McCaffrey and the now-healthy Greg Olsen are Newton's two primary weapons. Both should have big games.

Newton will also pick up chunks of yardage with his legs, as usual. Newton's ability to scramble is significant, as the left side of Carolina's offensive line is a liability the Steelers should be able to exploit.

RECAP: Full disclosure: I'm marking down two units down on the Panthers, but I will not bet this game. Because I already have: 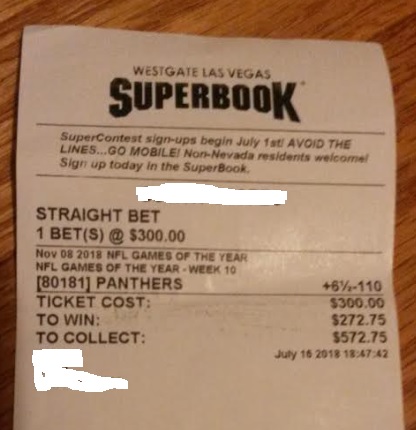 The Westgate casino allows you to bet on certain games in advance, and this one really stood out to me. I couldn't believe that the Panthers were +6.5, so I put $300 on them, making note of it in my 2018 NFL Betting Props page. I considered Carolina to be better than Pittsburgh heading into the season, and I still think that's the case! Both teams have dynamic offenses playing well, but Carolina's defense is superior.

I put three units on +6.5. I still like the Panthers at +4, but not as much. We lost some line value - Carolina was +6 on the advance spread - and these Thursday night games tend to be wonky. I'm going to mark down the Panthers +4 at two units, and I would legitimately wager on them for that amount if I didn't have a bet placed on them already.

THURSDAY THOUGHTS: This spread has dropped to -3 -125, as there is a ton of sharp action coming in on the Panthers. I still like Carolina for two units, though center Ryan Kalil's condition is worth monitoring.

FINAL THOUGHTS: This spread has settled at +3.5, as the sharps bet the Panthers all the way down from +5 to that number. I believe Carolina to be better than Pittsburgh, so I like the points as well. I hate Thursday night games, so I wouldn't go above two units, but Carolina seems like the right side, especially with Ryan Kalil set to be in the lineup.

Vegas got slaughtered again in Week 9. But don't take my word for it...

The overall record of heavily bet teams is now 20-22-3. Here are the teams getting the most bets this week:

The public is very confident right now. I'm even getting ridiculous comments below like, "Your and idiot you should only bet on the best QB!" The sportsbooks will destroy people who have this mindset. I don't know if that'll happen this week, but it will at some point.

ATLANTA OFFENSE: I'll be highly interested in the injury report concerning this game. The Browns lost several players in last week's loss to the Chiefs, including star cornerback Denzel Ward. Cornerback E.J. Gaines and linebacker Christian Kirksey were also knocked out, and then there's the team's best linebacker, Joe Schobert, who has missed the past couple of games. There's a chance the Browns will have a skeleton crew stop unit on the field this Sunday.

That, of course, is not a good thing against Matt Ryan, to say the least. Ryan isn't as good on the road as he is at home, but he was stellar in last week's victory at Washington, converting countless third downs. If Ryan doesn't have to worry about Ward covering Julio Jones, that's absolutely enormous, as all of his options will be open. The Browns' cornerbacks outside of Ward are lacking, so Calvin Ridley and Mohamed Sanu already had positive matchups. That goes for tight end Austin Hooper as well; Schobert's absence has severely weakened Cleveland's ability to cover tight ends.

Of course, the Falcons may not even have to throw very much. The Browns have been atrocious against ground attacks all year, especially with Schobert being out. Opposing runners have trampled them every week, and Tevin Coleman won't disappoint.

CLEVELAND OFFENSE: All of what I've written makes it sound like the Browns will get blown out. Well, I haven't gotten to Atlanta's pathetic defense yet. Like Cleveland, the Falcons have injury woes in the middle of their stop unit, which would explain why they've struggled so much against tight ends and pass-catching running backs.

Baker Mayfield will be able to connect with David Njoku and Duke Johnson with large amounts of success. Johnson, especially, as he finally was included in the game plan last week in the wake of the coach firings. It's unclear why Johnson wasn't doing much beforehand, but he's such a dynamic threat out of the backfield, and he performed well versus the Chiefs. He'll accumulate lots of receiving yardage once again.

The Falcons haven't been good against the run either, so Nick Chubb should play well. Chubb nearly hit 100 rushing yards last week despite being in a constant large deficit, and he could eclipse that mark in this game. That'll open things up for Mayfield, who needs all the help he can get, given that Greg Robinson is his left tackle.

RECAP: Half of Atlanta's wins this year have been close calls against bad teams at home (Giants, Buccaneers), which is why they were only -1 at Cleveland on the advance line. Now, because of one victory against an unfocused Washington team, Atlanta has been bumped up three points, crossing the top key number of -3 and matching a third-tier key number of -4.

This is an absurd overreaction, and one that I want to bet against. Now that Mayfield is healthy, and the new coaching staff has an entire week to install a game plan, the Browns look appealing versus one of the worst defenses in the NFL.

The problem, however, is the injury report. The Browns could be missing several talented defensive players. If Ward and Schobert are slated to return to the field, I could see myself betting the Browns heavily. For now, I'll designate them for TBA units.

THURSDAY THOUGHTS: The Browns just lost two defensive players for the year, but they've had good news in Denzel Ward practicing. This spread has risen to +6, so if Ward and Joe Schobert manage to return to action, Cleveland will be a very enticing play.

SATURDAY NOTES: The Browns lost Christian Kirksey and E.J. Gaines for the season, but the injury report has actually been favorable for them because both Joe Schobert and Denzel Ward are questionable after being limited in practice all week. If they both play, I'm going to bet a unit or two on the Browns, so check back Sunday morning.

FINAL THOUGHTS: The Browns have Denzel Ward and Joe Schobert active, which is exactly what I wanted to see. Having Schobert back and Ward available is huge. I like the Browns now enough to bet them for a couple of units. Cleveland is available at +6 -110 at both BetUS and Bovada.

Is anyone going to bet Cleveland?