Week 17 NFL Picks will be posted all day Wednesday, per the new schedule. I've received mix reaction to this, so voice your opinion via e-mail or in the comment box below. Follow me @walterfootball for updates.

Remember when Tom Brady used to be the most clutch quarterback in the NFL? He had that epic drive against the Rams in the Super Bowl. He then engineered numerous other fourth-quarter comebacks, including one to defeat the Panthers two years later to claim his second Lombardi trophy. After he earned his third, there was a wide-spread belief that he would pass both Joe Montana and Terry Bradshaw and eventually earn five or more total rings.

Well, Brady's been stuck on three. He's no longer clutch; in fact, he often melts down in the fourth quarters of big matchups. He seems to really care about some games - especially those involving Tim Tebow - but then he's so lackadaisical in others.

So, what happened? The obvious answer is his wife. But more specifically, it's the haircuts that his wife forces him into getting. It's unknown to the media, but Brady's haircuts are much more than just silly fashion statements; each haircut gives Brady a new persona.

For instance, the following exchange took place in the shadows of Gillette Stadium. 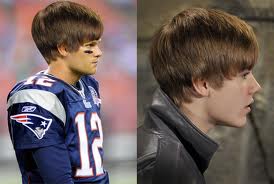 Tall Masked Man: Our plan has finally come to fruition.

Tall Masked Man: Just look at them. Frolicking together on the field so gleefully. Soon enough, the reporters will find out, and Tom Brady will be a disgraced quarterback.

Tall Masked Man: I wonder how late they'll stay up together.

*** Both men stare out onto the field, where Tom Brady and Justin Bieber are running around playfully. Both Brady and Bieber are sporting identical haircuts and are wearing Patriot No. 12 jerseys. They've even had facial surgery in an attempt to look identical. ***

Tom Brady: No, you're Justin Bieber!

Justin Bieber: No, you're Tom Brady!

Tom Brady: I love you, Tom!

Justin Bieber: I love you, Justin!

Tall Masked Man: I never imagined that we would be able to engineer Tom Brady into acting so heterosexually challenged, but it worked.

Masked Woman: Of course it worked.

Masked Woman: Rise, Lords Peyton and Josh. You have served me well.

Peyton Manning: It was my pleasure. After losing to Tom in all of those playoff games earlier in my career, I needed to get revenge beyond beating him on the football field.

Josh McDaniels: And I wanted people to stop calling me McDouche! That's all Tom and Bill Belichick called me.

Peyton Manning: Well, you're in the right place, McAwesome. We've gotten our sweet revenge. But your grace, I'm wondering what you have against Tom?

Masked Woman: That is for another time. Come, it's time to alert the press of Tom Brady and Justin Bieber's sexual affair. After that, we shall commence Stage 2 of our plan!

Who is the Masked Woman? Why does she want revenge? And what does she have planned for Brady? Find out next year on THE ADVENTURES OF TOM BRADY'S HAIRCUTS!

NEW ENGLAND OFFENSE: Tom Brady needs to stop getting off to these slow starts. He was 3-of-10 with two interceptions at one point at Jacksonville last week. He was lucky to be playing such a poor team because it was easy for him to overcome an early double-digit deficit. He didn't have as much luck against a superior 49er squad the Sunday before.

The Dolphins fall under the San Francisco category, at least defensively. They have the sixth-most sacks in the NFL (41) and were able to take Brady down behind the line of scrimmage on four occasions during a Week 13 battle. Brady was just 24-of-40 for 238 yards, one touchdown and an interception in that contest - the 6.0 YPA being a season-low.

New England was able to move the chains in that Week 13 victory with the help of the running game. The Dolphins, who have struggled versus ground attacks recently (4.53 YPC past four weeks), surrendered 109 rushing yards to the Patriots. However, they were able to limit New England to just two touchdowns because they have the best red-zone defense in the NFL. If they'll be able to hold the Patriots to threes instead of sevens again, they'll have a chance to cover and perhaps even win.

MIAMI OFFENSE: My editor laughed at an article he read recently that claimed that Reggie Bush will have difficulty reaching 1,000 rushing yards on the season because the Patriots have a terrific run defense. Bush needs just 40 yards to get to that milestone, so how prolific can New England be against ground attacks?

Well, not prolific at all. Save for last week, because they were going up against someone named Montell Owens, the Patriots have surrendered at least 82 rushing yards to every single opponent since Week 7. Bush has been difficult to stop lately. The Dolphins inexplicably gave him just 15 touches (all carries) against New England in the aforementioned Week 13 tilt, but he's eclipsed 100 yards from scrimmage in each of the past three weeks. This is his final chance to audition for a new contract, so look for him to have another big game.

Meanwhile, Ryan Tannehill has also performed well lately. He bounced back off rough outings against the Patriots and 49ers to go 22-of-28 for 220 yards and two touchdowns against Jacksonville, and then he followed that up with another decent outing versus Buffalo in which he tossed two touchdowns and rushed for 44 yards. However, he was just 13-of-29 for 186 yards and a lost fumble when he battled New England four weeks ago. He's also been much worse on the road. Consider the dichotomy:

And Tannehill struggled against Bill Belichick at home. Imagine what'll happen in Foxborough...

RECAP: The Dolphins have been on fire, but their impressive play has come at home. They're much different on the road, going 2-5 outside of the Sunshine State. They've lost by double digits at the two teams (49ers, Texans) I currently have in the top 10 of my NFL Power Rankings.

I like the Patriots to bounce back. They've been sloppy the past two weeks, but Belichick and Brady will get their act together. They always perform well in Week 17, and I don't expect this year to be any different.

A decent amount of action on the host.