Week 5 NFL Picks will be posted all day Wednesday, per the new schedule. I've received mix reaction to this, so voice your opinion via e-mail or in the comment box below. Follow me @walterfootball for updates.

Remember when Tom Brady used to be the most clutch quarterback in the NFL? He had that epic drive against the Rams in the Super Bowl. He then engineered numerous other fourth-quarter comebacks, including one to defeat the Panthers two years later to claim his second Lombardi trophy. After he earned his third, there was a wide-spread belief that he would pass both Joe Montana and Terry Bradshaw and eventually earn five or more total rings.

Well, Brady's been stuck on three. He's no longer clutch; in fact, he often melts down in the fourth quarters of big matchups. He seems to really care about some games - especially those involving Tim Tebow - but then he's so lackadaisical in others.

So, what happened? The obvious answer is his wife. But more specifically, it's the haircuts that his wife forces him into getting. It's unknown to the media, but Brady's haircuts are much more than just silly fashion statements; each haircut gives Brady a new persona.

For instance, the following conversation took place yesterday, as Brady appeared on ESPN's PTI to discuss his upcoming matchup against Peyton Manning... 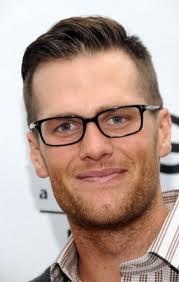 Tony Kornheiser: Our guest for Five Good Minutes needs no introduction. He's the one and only Tom Brady! Tom, I have to ask you, what is up with the hair and the glasses? You look like I would if I still had hair!

Tom Brady: Why thank you, Anthony Kornheiser. You see, I'm preparing for my interview with the Hogwarts Academy. Though I may be a muggle, I've been reading about all of these spells, and I believe I have mastered them all. I'll need them against my nemesis Peyton Manning.

Tony Kornheiser: Spells? Who cares about spells? Let's talk about your hair, Tom. Your hair!

Tom Brady: I use a spell to do my hair each week. Let me show you. Hairo Combo!

Tony Kornheiser: Whoa, that's pretty cool! Do you have a spell so I can grow hair? I need hair!

Michael Wilbon: That's great, Tony. Except you're siding with the cartel, the NCAA. This was the NCAA's plan all along. Of course, they're going to give your boy Tom Brady a hair spell. He went to Michigan, which is in the Big Ten, along with my alma mater Northwestern, can't say that, can you, Tone? But the NCAA cartel would never give someone from a smaller school a chance to have a hair spell.

Michael Wilbon: Of course you have hair because you're part of the cartel even if you went to a small school that no one cares about, unlike my alma mater Northwestern.

Tony Kornheiser: Oh stop it, Wilbon. Why don't you go cry in your gated-community mansion? Tom, before we let you go, can you teach me the levitation spell so I can get from one place to another without going on an airplane? I hate flying!

Tony Kornheiser: Wingardium Leviosa! Look, Wilbon, I can fly! And I have hair!

Michael Wilbon: That's what the NCAA wants you to do because they're a cartel run by a bunch of crooks!

SEATTLE OFFENSE: I don't know what the Panthers were thinking when they decided that they didn't need to upgrade their defensive tackles this past offseason. The interior of Carolina's front is ridiculously weak against the run, ranking 31st in that department (5.2 YPC). They've surrendered at least 117 rushing yards to every opponent they've faced this season.

It's safe to say that Marshawn Lynch will go nuts. Of course, this doesn't mean the Seahawks will win. Lynch gashed the Rams for 118 yards on just 20 carries, yet Seattle still lost. The problem, naturally, was the passing game. Russell Wilson struggled to move the chains, thanks in part to his receivers failing to get any sort of separation. Wilson also threw three interceptions, though two were fluky.

While the wideouts were partly guilty of capsizing Seattle's offense, the main culprit was right tackle Breno Giacomini. Chris Long completely humiliated him. I'd like to say it gets easier, but it really doesn't, based on what Charles Johnson just did to Tyson Clabo in Atlanta.

CAROLINA OFFENSE: It's strange that the Panthers' scoring attack is so much more fluid when Jonathan Stewart is in the game. It's not even that he does his damage while running the ball; it's his presence in pass protection that really aids Cam Newton.

Newton looked like he was back to normal last week, but that could be short-lived against Seattle's elite defense. The Seahawks have a tremendous secondary that can take away everything downfield, forcing Newton to scramble almost exclusively to pick up first downs. It's not like Newton would have much time in the pocket anyway. Seattle excels at getting to the quarterback and appears to have a great matchup with Bruce Irvin going up against pedestrian right tackle Byron Bell.

Part of the reason Newton was so successful last week was because Carolina was able to run the ball so well versus Atlanta's 29th-ranked ground defense. Things won't be so easy this time, as the Seahawks are third in that category. Seattle hasn't given up more than 77 rushing yards to any opponent this year.

RECAP: The Seahawks tend to struggle on the road, so that's the only reason this won't be a big play. Seattle is the better team and happens to be getting points. Meanwhile, the Panthers are coming off an emotional divisional loss and may not be ready to play a very physical game.

FINAL THOUGHTS: Chris Gamble and Jon Beason aren't going to be in the lineup, but I'll keep this pick at two units.

The Panthers put everything into that Atlanta game. Now they're favorites over an unfamiliar foe they don't really care about.


The Vegas. Edge: Seahawks.
Action has pretty much evened out after early money on the host.