Week 11 NFL Picks will be posted all day Wednesday, per the new schedule. I've received mix reaction to this, so voice your opinion via e-mail or in the comment box below. Follow me @walterfootball for updates.

Emmitt on the Brink is back! Season 5, Episode 11 has been posted - Eric Mangini and Asian Erin Andrews' wedding!

NEW ORLEANS OFFENSE: Do I even have to talk about how things will work on this side of the ball? Well, I suppose I could use this space to criticize the lack of effort the Raiders gave against Baltimore. That was so unbelievably pathetic. I couldn't believe what I was watching. Guys like Tommy Kelly and Philip Wheeler just gave up. Kelly, who should have been cut months ago, offered up this gem earlier this week: 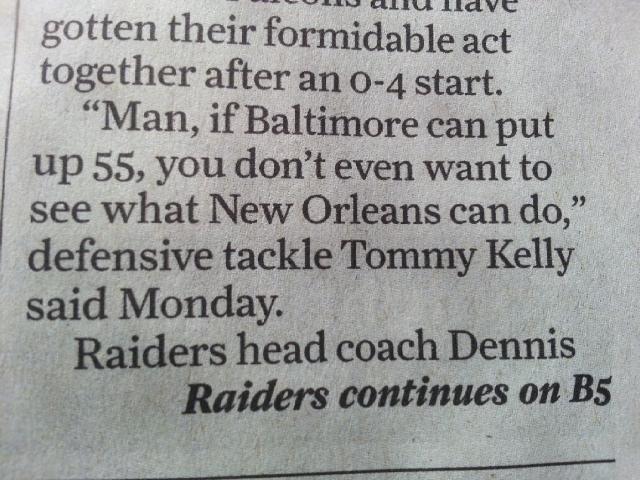 Nice job, Tommy. Way to give yourself an excuse when the interior of New Orleans' offensive line destroys you.

Drew Brees won't have any issues scoring in this contest. Oakland's secondary, which is missing starting cornerback Shawntae Spencer, doesn't have a chance. Hopefully Richard Seymour will be back; he was out last week with a hamstring. His return could at least limit the Saints' rushing attack.

OAKLAND OFFENSE: The Saints will be scoring on nearly every possession, but the same could be said for the Raiders. New Orleans' has one of the worst defenses of all time. Every quarterback has looked great against them this year, and Carson Palmer should be no exception. Palmer's downfield weapons are too talented for the Saints to handle.

The Raiders will get a boost this week, as right tackle Khalif Barnes will return to the lineup for the first time since Week 2. I know, it's difficult to say Barnes' name and "boost" in the same sentence, but he's a billion times better than his replacement, Willie Smith. Barnes should help keep Palmer clean against a pass rush that has just 14 sacks on the year if you exclude what happened two Monday nights ago against Philadelphia's terrible front line.

Unfortunately for Oakland, Darren McFadden will not be back. Neither will Mike Goodson. Marcel Reece will see the majority of the workload again. He'll be effective as a receiver, but he's not good enough of a runner to exploit the Saints. Thus, it'll be difficult for the Raiders to score touchdowns once they reach the red zone, which has actually been the case all year. While the Saints are notching sevens, the Raiders will only be getting threes, and that will be the difference in this game.

RECAP: This is a terrible spot for the Saints and a great situation for the Raiders. Here's why I love the home underdog:

1. New Orleans is coming off an emotional victory against the Falcons and will be flat, especially with the 49ers, Falcons, Giants, Buccaneers and Cowboys coming up.

2. The Raiders just endured a spread loss of 25-plus, which is usually a bet-on situation. Teams that are blown out tend to be embarrassed, so they play extra hard the following week. Forget Terrell Williams' 4-year-old son; this week, Oakland is playing for pride.

3. The public is pounding New Orleans like there's no tomorrow. Vegas has to recoup its losses from two weeks ago.

4. The Saints are not the same team out of their dome. Brees has covered just four of his previous 13 as a road favorite of more than four points.

FINAL THOUGHTS: I don't like that Richard Seymour is out, but there's just too much going in the Raiders' favor for me to move off the three-unit pick.

The Saints are coming off an emotional win. Also, check out their next five opponents: 49ers, Falcons, Giants, Tampa Bay and Dallas.

Predictably, everyone is on the Saints.