Week 3 Recap: I had an awful first two weeks. I'd give you a detailed recap - still pissed about every single special teams touchdown going against me that first Sunday* - but e-mailer Joseph A. summed it up with one Looney Tunes picture: 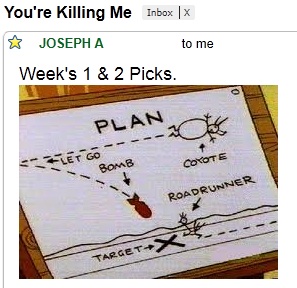 Screwed the Pooch this week... Look, I get it, it's a free site, right? So shame on me for using any of these picks. I avoided your Chiefs pick (disagreed with that one) and stuck with my Titans over your suggested Pats survivor pick and sweated that one out. I took a shot on your Bengals pick 'cause I bought into that stuff about West Coast teams flying east but I forgot we are talking about the "Bengals" here.

Call me crazy, but I don't think this guy is really Yoda. Bet both September NFL Picks of the Month, he would, hmmm???

I do have some more entertaining hate/confused mails, and I'll show those later. I'll be posting these NFL Picks throughout the day. Follow me at @walterfootball for updates.

* - About the special teams scores, I'm not going to linger on that Green Bay-Chicago phantom holding call. Yes, it was shady, and yes, it should have been a touchdown, but it would have been yet another bogus cover against me. The Packers deserved to beat the spread because they dominated that game, so I was glad to see justice prevail - for once.

DALLAS OFFENSE: Think center Phil Costa will have four botched snaps again? That was an embarrassing performance on Monday night, but it reportedly had to do with former Cowboy Stephen Bowen knowing Tony Romo's cadence. Bowen used this to his advantage and was able to fool Costa into snapping the ball early.

I doubt the Cowboys will have anything like that happen to them against Detroit. I do, however, believe that Dallas will have trouble moving the football. The Lions have a fierce pass rush and shouldn't have any problem getting to Romo, who was chased often Monday night because of his poor offensive line. Felix Jones, meanwhile, could be unavailable because he reaggravated the shoulder injury he suffered in Week 2.

Romo will be able to move the ball on occasion like he did Monday night, thanks to Dez Bryant and Jason Witten. Once the Cowboys get to the red zone, however, they'll probably struggle to punch the ball in once again.

DETROIT OFFENSE: The Cowboys lead the league in sacks with 13. That's not good news for Matthew Stafford, who was beaten up at Minnesota because both of his tackles couldn't block Jared Allen and Brian Robison. Right tackle Gosder Cherilus was benched, while left tackle Jeff Backus could be joining him on the sideline soon if he doesn't improve.

Much like the Cowboys, Detroit has great weapons and will be able to keep the chains moving on occasion. No one in Dallas' beleaguered secondary has a prayer of covering Calvin Johnson, and it's not like Rob Ryan can focus all the attention on Megatron because Brandon Pettigrew is healthy, the electrifying Titus Young is emerging, and Nate Burleson is a steady tertiary weapon.

Oh, and then there's Jahvid Best out of the backfield. The Cowboys are second versus the run, but Best will be more of a factor catching passes.

RECAP: I really don't feel strongly about either side. Detroit is the better team, but coming off a major rally like that and then having to travel again could be tough. Meanwhile, Dallas' struggles after Monday Night Football games are documented in the trend section below. With a gun to my head, I'm taking the Lions because they're playing better football right now.

As you may expect, the public is all over the Lions.