E-mailer David P. works at a bar in West Chester, Pa. (I worked for West Chester's newspaper back in 2005; it's about a 45-minute drive from Philly). David's a reader of this Web site and also happens to be in charge of posting slogans on the sign outside of the bar. He said I could be named "celebrity customer of the week" and receive alcohol in exchange for promoting the bar and giving him more slogans. I'll have to think of slogans - suggestions are very welcome - but here's something David P. posted earlier in the summer 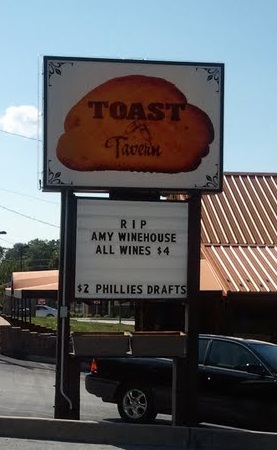 Celebration time! I can just hear the uptight, pretentious douche bags who work in the media cringing at the lack of political correctness on that sign. I love it.

Anyway, you may have noticed a link below each point spread and pick that says Discuss Game, Talk Trash. This is for the new Sunday Smackdown section, where you'll be able to talk about the game throughout the week and during Sunday's action. Unlike NFL.com's GameCenter, anything goes, save for the obvious bad words.

KANSAS CITY OFFENSE: Matt Cassel stinks. He's 57-of-109 for 437 yards, one touchdown and a whopping nine interceptions in his last four games, three of which have been at home. As I wrote last week, the only way Todd Haley can turn this around is to pull a Buddy Garrity and meet Charlie Weis at some random diner halfway between Kansas City and Gainesville.

The Chargers are ranked 24th against the pass, but that stat is misleading because Tom Brady destroyed them in Week 2. They limited Donovan McNabb to 39 passing yards in the opening contest, and it shouldn't surprise anyone if Cassel posts a similar total.

Unfortunately for Kansas City, Jamaal Charles is out, so Dexter McCluster and Thomas Jones will split carries. McCluster has game-breaking talent, so there's a chance he could have a couple of long gains. San Diego ranks 22nd versus the rush.

SAN DIEGO OFFENSE: The Chargers are up to their old tricks. Philip Rivers is looking great, but San Diego keeps making mistakes. Whether it's turning the ball over inside the opposing 35, surrendering kick returns, or calling bad plays near the goal line, the Chargers are once again beating themselves.

Since it's early in the year, I expect that to continue in this contest. Romeo Crennel is an excellent defensive coordinator and still has really good players on his stop unit. He did a number on San Diego's offense in the opening week of the 2010 season, so it wouldn't really surprise me if the Chargers were somewhat limited in this contest - especially if they keep using the fumble-prone Mike Tolbert over the flashy Ryan Mathews.

RECAP: I absolutely love the Chiefs in this game. You may ask, "How can you possibly like Kansas City? They stink, and they keep getting blown out?" Well, those are two of the reasons...

1. I actually don't think the Chiefs are THAT bad. As mentioned, Crennel is still there. Tamba Hali, Derrick Johnson, Brandon Flowers and Brandon Carr are all outstanding defenders. Tyson Jackson is actually doing a good job this year. Kelly Gregg can still stuff the run. Inside linebacker Jovan Belcher is underrated. Yes, they just gave up a billion points to Detroit, but the team was really deflated when Charles was lost. You could see it. They just gave up. More on this later, by the way.

2. In terms of just covering, it's good when a team loses by more than 28 points - underdogs in this situation are 55-30 against the spread since 2002, excluding the weird Week 17 games. As you can imagine, teams that get "blowed out" have the line heavily inflated against them, since no one wants to bet on them.

3. But Kansas City has been "blowed out" twice. Even better. Teams that have lost by 28-plus in two consecutive games are 3-1 against the spread since 2002. Furthermore, teams that have a losing margin of 70 points or more in consecutive contests are 2-0 ATS in the same span. Both the 2002 Cardinals and 2009 Titans were destroyed twice in a row, and both came back with straight-up victories.

4. The Chiefs are unlikely to get a straight-up victory against the Chargers, as this high spread may indicate. The line, as of this writing, is +14.5. That's significant, as San Diego hasn't covered a spread of 14 or more this decade (0-3 ATS).

5. Speaking of the spread, I think this line is out of control. Yes, the Chiefs are bad, but are they much worse than Minnesota? I bring up the Vikings because they were only +9 at San Diego. Is Kansas City really 5.5 points worse than crappy Minnesota? As I indicated earlier, I don't think so.

6. The Chargers won't be nearly as juiced up for this game as they were against the Vikings anyway. I'm not talking about their annual September swoon, though that doesn't hurt. San Diego will simply be on an emotional low after losing to New England.

7. The Chiefs, meanwhile, should have motivation to beat San Diego. Missing Cassel, they lost to the Chargers, 31-0, in December last year. This plays a factor, as teams playing a divisional road game attempting to avenge a loss of 14-plus points to the same opponent are 72-47 against the spread since 2002.

8. I also like the fact that Kansas City is an underdog playing its second-consecutive road game off a loss. Teams fare well in this scenario (121-69 ATS since 2002). Todd Haley himself is 4-0 ATS in this situation.

9. I like the line movement. This spread opened -15, but despite tons of money on San Diego, the line has dropped to -14.5, indicating that A) the sharps like the visitor and B) the books want more money on the host.

I said I'd bring this up again - will the Chiefs lose all hope now that they're without their best offensive player in Charles? Maybe. But we've seen teams bounce back from this before - notably the Patriots without Tom Brady in 2008 and the Broncos losing Terrell Davis in 1999. That Denver team was 0-4 when it lost Davis a torn ACL. They won the following week at Oakland as 7-point underdogs.

LOCKED IN: Antonio Gates is out. This may cause the line to drop, so I'll settle for the +15 that can be found on Bodog.

It's going to be tough for the Chargers to get up for the Chiefs after losing at New England.

Who in their right mind would bet on Kansas City?