Ed. Note: The season is almost gone, but to help you figure out the last few weeks of the fantasy season - and into your playoffs! - Chet is mapping out team defense rankings for each position and charting them to provide the Remaining Strength of Schedule. Enjoy! 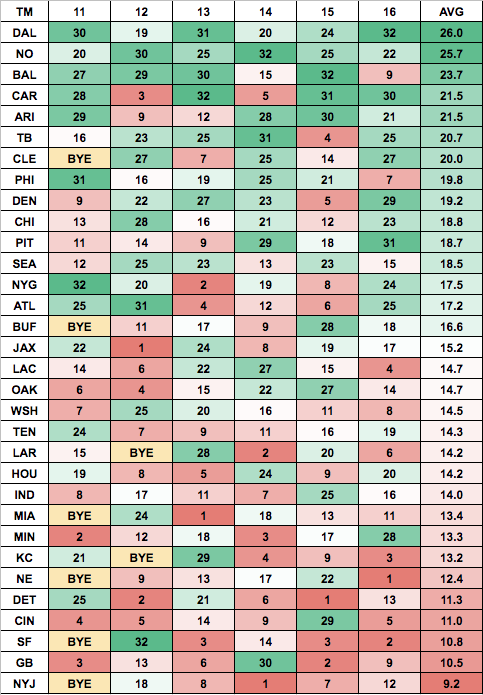 Dak Prescott, QB, Cowboys
He's hard to trust, but has put up decent fantasy games in three of his last four. He notched a rushing touchdown in those three games, his first three scores of the season, yet also put up his two best passing-yardage games in those last three matchups as well, so there are good things happening, and the addition of Amari Cooper isn't going to hurt. And of course, there is the schedule, which is why we are here. To finish off the fantasy season, Prescott will match up at Atlanta, Washington, New Orleans, Philadelphia, at Indianapolis, and Tampa Bay. Four of his last five games will be at home against weak pass defense and strong-enough offenses, for the most part, to push him to do more than hand the ball off to Ezekiel Elliott.

Drew Brees, QB, Saints
Brees' schedule is great, but even if it wasn't, he has been playing too well for it to matter. The good news is that all three of his road games will be in good-weather areas, so don't worry about those too much and collect your fantasy points.

Joe Flacco, Lamar Jackson, Robert Griffin III; QBs, Ravens
Unfortunately, the Ravens have a great passing schedule to finish the season, as they'll face Cincinnati, Oakland, at Atlanta, at Kansas City, Tampa Bay, and at Los Angeles Chargers. I say unfortunately because Joe Flacco is hurt, but we don't know how badly and he hasn't been good enough to take advantage of good matchups as it is. And if Flacco's injury is something that is worse than the Ravens are leading on, we aren't 100 percent sure who his backup would be, but I'd still be surprised if it's not Lamar Jackson. If we knew that Jackson would be the guy for at least a portion of this stretch of great matchups, I'd want to make sure he's on my roster, as his rushing ability coupled with whatever he can get through the air against these weak defenses, should allow his fantasy upside to be great.

Cam Newton, QB, Panthers
Newton has been great this season, but he is coming off a poor game in Pittsburgh and just maybe you could finagle a trade to grab him for his great matchups. His schedule starts this week at Detroit, then Seattle, at Tampa Bay, at Cleveland, New Orleans and Atlanta. The Seahawks could be tough, but he does get them in Carolina, and the Saints and Falcons at home in Weeks 15 and 16 are great for the fantasy playoffs.

Aaron Rodgers, QB, Packers
Rodgers hasn't been putting up the numbers we've wanted, although he was hurt early in the season and had no running game to speak of, but both of those things have changed recently. The question is, can he reach his upside with a tough schedule, at Seattle, at Minnesota, Arizona, Atlanta, at Chicago and at the New York Jets? Atlanta is of course a smash spot at home, and the Jets' pass-defense ranking isn't quite in tune with how they are playing at the moment, but the other matchups aren't pushovers. If Rodgers had been putting up big numbers before this stretch, I wouldn't care about his schedule, but he hasn't, so it is a bit concerning. Would I trade Rodgers for Brees straight up? Yes. Would I trade him for Newton straight up? Maybe. But in the end, he's still Aaron Rodgers and I expect him to be a strong fantasy play in every matchup.