Relying on players from Seattle this coming season in fantasy could be a little perilous, as the team is sinking quickly from its recent powerhouse days. The Seahawks still have Russell Wilson, however, which is enough to expect fantasy production from their offense, as Wilson has been a consistent catalyst even in their darkest times. Wilson's ability to evade tacklers and make tough throws should keep the passing game on track, with the primary beneficiary being Doug Baldwin.

Baldwin has put up good numbers over the last three seasons, ranking fourth in total wide receiver fantasy points and second in touchdowns receptions. Those overall numbers look great and are, but they are also a product of extreme consistency in health, as he is one of just 14 receivers to play in all 48 games during that span. The consistency is excellent, but it still led to fantasy finishes of WR7, WR10 and WR13. Those finishes are good, but they aren't showing his upside due to his low target numbers. During these last three seasons, Baldwin has only averaged 7.1 targets per game. When you look at the top fantasy receivers in the game, they almost always see eight or more, with players like Antonio Brown and DeAndre Hopkins topping 11 targets a game.

Baldwin has turned his seven targets into good fantasy numbers by playing with high efficiency. Over the last three seasons, he ranks eighth in yards per target, fourth in catch rate and second in touchdowns. When he gets the ball thrown his way, he makes it count. The obvious question follows, how many targets will Baldwin see this year?

First, let's take a look at last year's target distribution: Baldwin 116, Graham 95, Richardson 80, Lockett 71, J.D. McKissic 46, Willson 22, Davis 18, Vannett 15, and so on and on with the scrubs. This offseason, Seattle let Jimmy Graham, Paul Richardson and Luke Willson head off to other-colored pastures, which leaves 197 targets up for grabs. The Seahawks did acquire wide receiver Jaron Brown, who is a talented, deep-ball player, but in no way a target hog, and journeyman tight end Ed Dickson, who is an average talent who won't command the targets Graham did. The lack of viable targets makes it easy to project Seattle's best receiver for an increase. How many exactly, is tough to say, but there is room for him to get into the 140-150 target range. I'm usually more conservative with my projections, so I've penciled him in for 25 percent of the target share, whereas he's been around 23-24 percent over the last three seasons. That puts him at approximately 136 targets with a chance for more if Wilson once again ups his total passes, which he has done from his second year on, with 393 attempts his rookie year and then 407, 452, 483, 546 and 553 last season. Seattle does want to run the ball more, but its best player is without a doubt Wilson, and rookie running back Rashad Penny will need to make a big leap to command enough work to limit Wilson's attempts. Add in the fact that Seattle's once dominant defense is slowly becoming middle of the pack, and the chances that the Seahawks will play from behind go up.

But let's say that Baldwin's targets don't improve the way we want. I don't expect that, but if it were to happen, there is an excellent chance that the type of targets he'll see this year will be in the red zone, where he has been consistent in his career, catching 16-of-41 red-zone targets for touchdowns, a 39-percent success rate.

Last year, Baldwin saw just eight red-zone targets to rank him 50th out of all wide receivers and 79th when you add in tight ends, while Jimmy Graham led all tight ends with 25 red-zone targets. In the last three seasons with Seattle, Graham saw 54 red-zone targets, catching 15 touchdowns for a 27.8-percent success rate, while Baldwin, in that same stretch, caught 16-of-41 targets for a 39-percent touchdown rate. Baldwin's size, 5-foot-10, 192 pounds, is not prototypical for a red-zone target, but his route running, especially in small spaces, is immaculate, and when you add in Wilson's skill set, you end up with extreme efficiency. Graham, one of the best red-zone targets in the league, stands at 6-foot-7, 265 pounds, and still, Baldwin was more efficient. That's amazing.

Now Seattle has lost 36 red-zone targets with Graham, Paul Richardson, who had more red-zone targets than Baldwin for some reason, and Willson out of town. Baldwin's best season was 2015 when he caught 12 touchdowns and finished as the seventh-best fantasy receiver despite just 103 targets, but that year was also his best year as a red-zone target with 17, of which he caught seven for touchdowns.

Baldwin's upside is tremendous this year with even a conservative 136 targets, plus around 20 red-zone targets. My projection has him catching 96 passes for 1,253 yards and ten touchdowns. That would put him as my eighth-best fantasy wide receiver this year, and his upside with more targets is even higher. 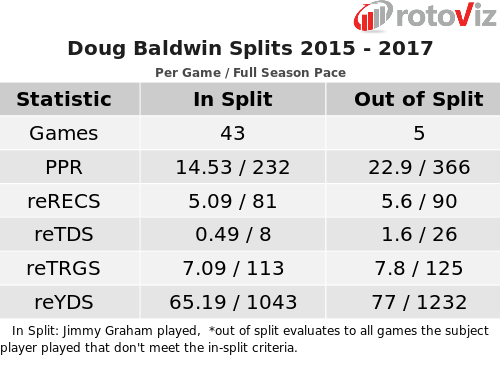 That 1.6 touchdowns a game isn't going to happen of course, but he sure got to work with Graham out of the picture.

When you look at games where Baldwin has totaled six or more targets, he has impressive numbers: 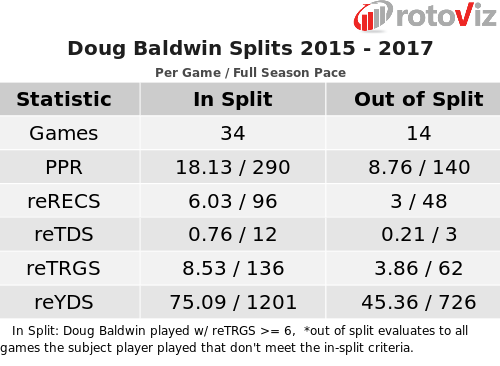 This season will be much tougher for Baldwin to hit those target lows as he has in the past, which gives him his usual floor as a top-10 receiver, but also gives him a ceiling as a top-5 receiver. Grab him in the third round wherever you can.