The world has ended. Didn't you know? I guess not. I imagine all of you are surprised that I'm stating this, but it's true. Life as we know it has come to a permanent conclusion.

This is because Nick Saban tested positive for Coronavirus, which is better known on this Web site as Fauxvid-19. Or, most recently, the "minor illness." A Coronavirus, as e-mailer Mike M. informed me, is a common cold, after all. That's quite literally what it is: 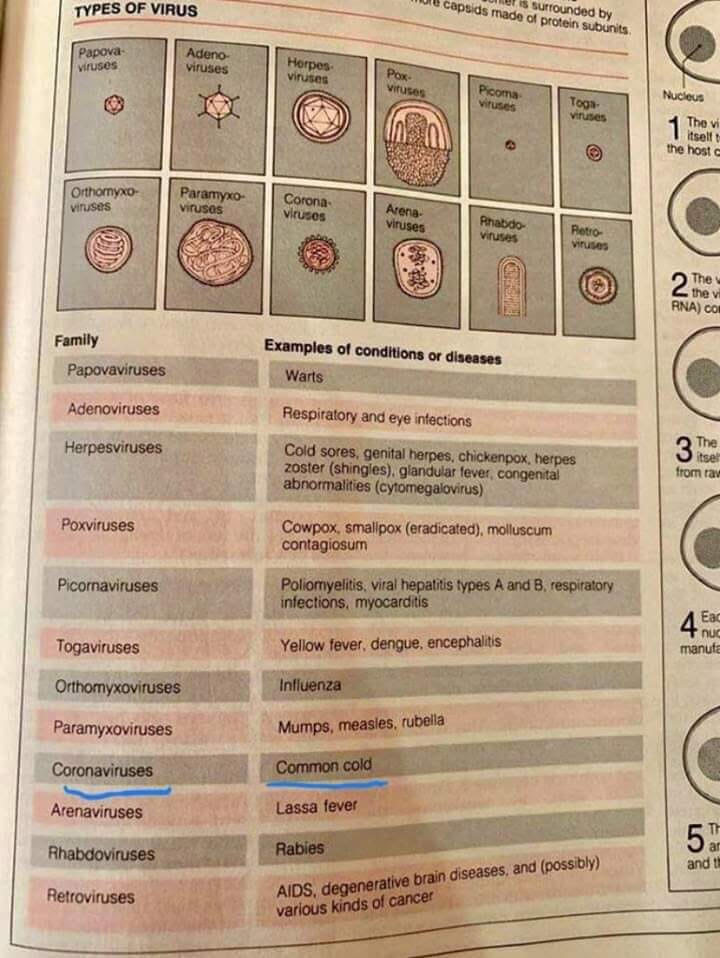 You wouldn't think that a virus that doesn't impact 80 percent of the people it infects and gives its "victims" a 99.98-percent survival rate if under the age of 60 would create much hoopla, but that's far from the reality in which we live. When someone is infected with Coronavirus, they are practically sentenced to death, according to crazed blue checks on Twitter.

Enter Saban, who contracted the Coronavirus. The best college football coach of most of our lifetimes has been infected with the minor illness, generating waves of panic throughout the streets. The reaction has been devastating. Major cities are burning. Businesses are being looted. Police officers are retiring en masse. Can you imagine if something like this had been occurring since, I don't know, Memorial Day? Our country would be in shambles! Luckily, smart people in authority would certainly find a way to stop it, right?

Unfortunately, we don't have much hope with Saban infected. Saban is due to die any day now. His symptoms are, wait let me look up how bad they are.

Oh, he doesn't have any symptoms. He's one of the many people infected by this common cold strand who happens to be symptom free. Well, in that case, why is the world ending!?

Let's check in with our good pal Christine Brennan for answers. Brennan, who writes for the USA Today, first caught my attention by penning this masterpiece: 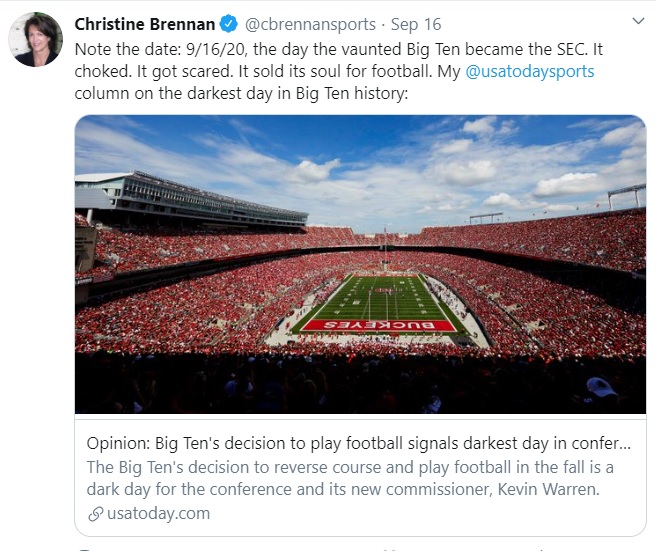 Yes, playing Big Ten football games is worse than children being raped by Jerry Sandusky. This shouldn't surprise you because Brennan falls under the same belief system that just granted immunity to same-sex child rapists in California, and also the same one willing to elect a proven child molester running for president.

Last week, we delved into more Pulitzer material from Brennan. She discussed Panic in Big Ten schools without even once quoting someone or citing an example of the panic taking place in Big Ten schools. That's how good of a writer Brennan is. Most writers would need to show their work, but she doesn't need to. She's that good.

Brennan's latest work of art is entitled, "Nick Saban and powerful SEC has one opponent it can't beat: COVID-19."

I haven't even read this yet, so let's journey through this column together and observe Brennan's weekly meltdown about a strand of the common cold.


The travesty of the 2020 college football season is now on full display ... Nick Saban has tested positive for COVID-19 and is currently in isolation at home.

Wait, I'm confused. Is the travesty that Saban contracted a minor illness that is giving him zero symptoms, or is it because he's stuck at home? Serious question. What if his wife is making him clean the gutters and take the dog for walks every two hours? That would totally suck.

Thankfully, Saban is not experiencing any symptoms of the coronavirus, he said in a statement.

I was wondering if Brennan would mention this, so I'll at least give her credit for that. What a devastating disease we have that doesn't impact a 68-year-old whatsoever.

It begs the question though, why can't the SEC beat Fauxvid-19 if Saban is symptom-free? Perhaps Brennan will provide us with answers.

For now, No. 2 Alabama's game with No. 3 Georgia is still on for this weekend, but the same can't be said for two other SEC contests that are no longer on the schedule.

I'm a bit disappointed in the two schools that canceled games. I've written that NFL teams should play through Coronavirus, and the same should apply to college football, as college kids are even in less danger when compared to NFL players, who are in no danger at all. This is just following the science and the data, two things the blue checks absolutely loathe if it doesn't fit their narrative.

The SEC, twisting itself into knots to try to grind out a season in the middle of a pandemic, still has some standards. It says you have to have 53 scholarship players to play a game. ... But Vandy already knows that it doesn't have the healthy bodies this week to pull off another game, so its trip to Missouri has been postponed.

Meanwhile, this just in from Ole Miss: Coach Lane Kiffin said his team is having "issues" with COVID-19. I'm not sure that qualifies as actual medical terminology, but since college football coaches usually prefer to say nothing about anything, I suspect we should keep an eye on Oxford over the next couple of days.

Cool story, bro. We'll have our best gumshoes on the case for that one.


Clearly, the coronavirus is just beginning to flex its muscles in the tough-guy sport of college football. This was utterly predictable, and what's happening is utterly shameful. Everyone who thought it was a good idea to use 18-22-year-olds as props to make some money by playing a sport that is the antithesis of social distancing should be starting to feel a little sick to their stomachs about now.

That's a huge leap to make, Christine. Outside of loser blue checks on Twitter, who even cares? A 68-year-old head coach is feeling no symptoms, and no player has been hospitalized for this virus, and yet the Coronavirus is "flexing its muscles" enough to make people a little sick to their stomachs? Why? If this were a serious disease, sure, but it's not. Unless college football begins using 75-year-old cancer patients as these "props" Brennan referred to, no one should be feeling sick at all.

To use the language of college football, the pandemic is coming out of the locker room at halftime with a 35-0 lead, and it's going to really start pouring it on in the second half.

Wrong. We're up 35-0; not the Coronavirus. Again, this common cold strand has not sent a single college player to the hospital. How can anyone in their right mind then declare that it's up 35-0? It's insane, fear mongering. Brennan should be locked in a padded room somewhere.

The ignorance of these alleged college leaders knows no bounds. Last Saturday, Florida coach Dan MullIen said he wanted the university to allow the 90,000-seat football stadium to be filled for this weekend's game. "Pack The Swamp," he said, like it's just any other old football season, or maybe a Trump rally.

Leave it to Brennan, a woman who is infected with a serious case of TDS, to mention President Trump. No surprise there.

And who, by the way, is Dan Mullien? Anyway, this was a fantastic idea by Dan Mullen. College students aren't at risk of Fauxvid-19, so they should be living life normally. If they want to pack a stadium, they should do so. If they don't want to go to the game, they don't have to. Their body, their choice.

The Big Ten is one of four conferences (the Pac-12, Mountain West and MAC are the others) standing by, watching this fiasco unfold, still waiting to kick off. If they were smart, they never would.

If they were smart, they would have begun playing a month ago, but they chose not to follow the science and data right away. Luckily they did before it was too late.

At any rate, I just completed the article, and Brennan still hasn't convinced me why the SEC can't handle Fauxvid-19. Saban will test negative soon enough, and the Florida-LSU postponed game will take place eventually. Oh, and we'll also have that all-important Vandy-Missouri game, too!

Back to NFL Picks