Fun NFL Pictures: 2011 | 2012 | 2013
This is a compilation of amusing NFL pictures I've posted on my NFL Picks and NFL Power Rankings pages. Follow me on Twitter @walterfootball for contest updates.

Some people say the Colts are 0-6 because Peyton Manning is injured. That's a bunch of bull crap. Clearly, this guy is entirely to blame for the team's 0-6 start:

Check out how strong Drew Brees' arm is:

Brees threw the ball over the freaking sun! Why hasn't anyone tested him for steroids yet?


Forum member The Prodigy posted this hilarious picture from the Chargers-Vikings game. I think someone got a little too excited about Percy Harvin's kickoff return touchdown. 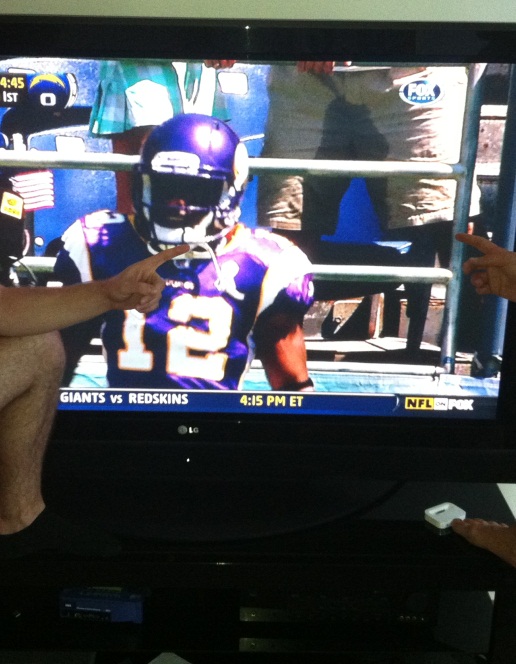 E-mailer Chris G. created this picture to submit it as a billboard in Pittsburgh. Looks like someone hacked into his e-mail because the Steelers added Max Starks:

I think that's pretty clever, and I wouldn't mind seeing that on a billboard if I were a Steeler fan. Something I'd never want to see on a billboard is this hilarious and very disturbing picture posted by forum member Hippie Slayer (great name): 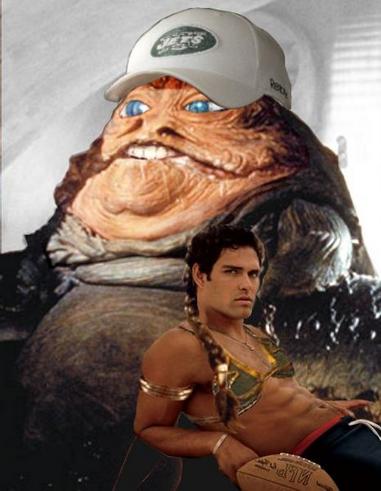 Luckily, I have Kraft's office bugged, so I was able to record Gronkowski's personal apology:

Robert Kraft: You better be sorry!

Robert Kraft: What!? No, idiot! Next time, invite me!

Robert Kraft: She's hot! The next time you bang her, I want to be involved. I'm always down for some M-M-F action!

Seriously, Gronk should be ashamed of himself for not including his boss.


You might feel cheated that I didn't get to post any hate mail this week. Well, here's a different sort of e-mail:

Wow, that question was so quick that I didn't even see it.


Adam Schefter tweeted the following during the free agency frenzy:

49ers sent out a mass email this afternoon to teams around the league to try and trade safety Taylor Mays.

I couldn't resist. I replied back (@walterfootball):

31 teams marked it as spam.

Fortunately, I was recently able to secure a copy of San Francisco's e-mail to the league. Don't ask me how; just read and enjoy: 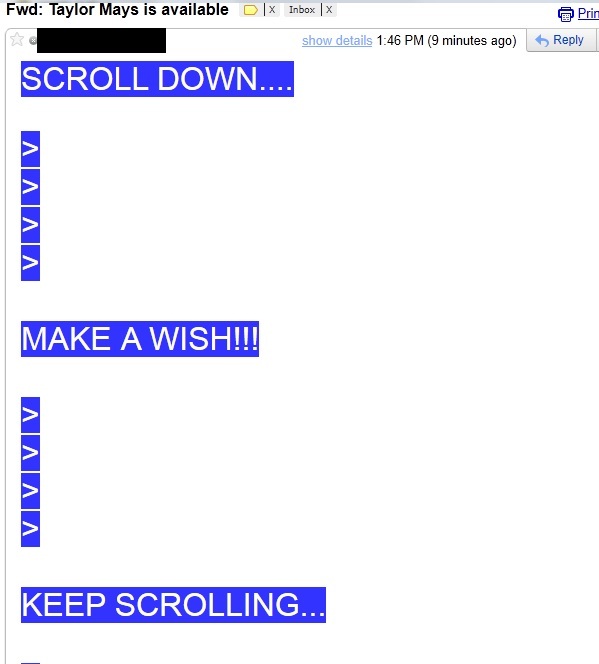 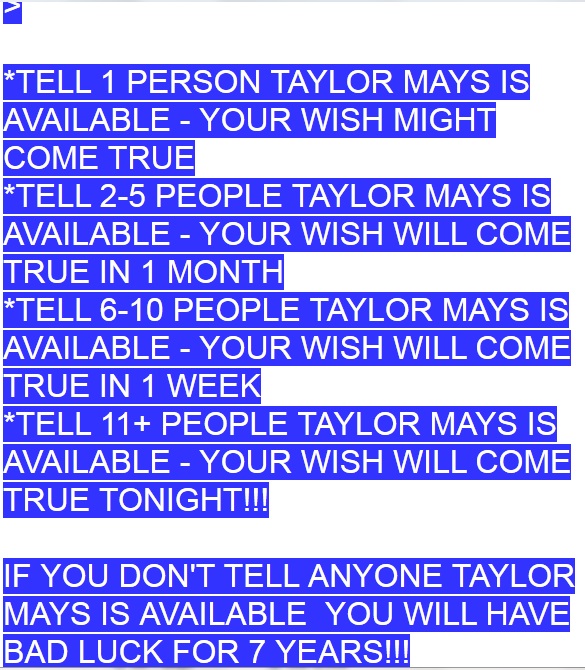 Think you've had enough of Tim Tebow coverage? I don't think you have. To shove more Tim Tebow down your throat, here's a neat picture courtesy from forum member DenverTyrant:

Look at the bright and shiny Tebow spin round and round! Weeeeeeeeeeeee!!!


I'm pissed off at FOX as well. Remember years ago when Rebecca Grant used to do those meaningless Verizon updates before kickoff? If you haven't been reading this site for a couple of years, I used to analyze these segments and express my disdain whenever Rebecca Grant didn't show off her awesome cleavage.

Well, FOX has been destroying this segment. In 2009, it was Rebecca Grant: 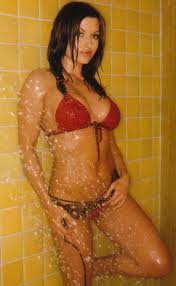 Now, it's some chubby, bald dude (Jay Glazer) who is in Subway commercials for some reason: How do you from a super-hot Rebecca to a mediocre Jill to a beastly Jay? Shouldn't the point of this be to get more attractive people on there each year? At this rate, I can only guess whom FOX will have doing the Verizon updates in 2012: 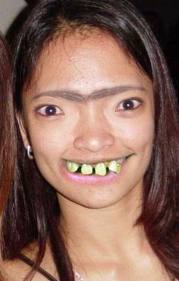 The Real John's first girlfriend! My apologies if you just puked all over your monitor, by the way.


Go to http://maps.google.com/ and click on "Get Directions." Type in Los Angeles, CA to Hawaii Kai, Honolulu, HI. The results are pretty hilarious.

For those who are too lazy to do this: 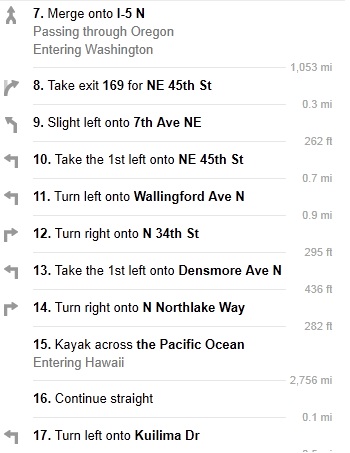 Flying from LAX to Hawaii is too simple. You must drive all the way up to Seattle, kayak across the Pacific ocean and then go straight, whatever the hell that means. Have fun getting eaten by sharks, by the way.


I have to take umbrage with NFL.com's game edge graphic: 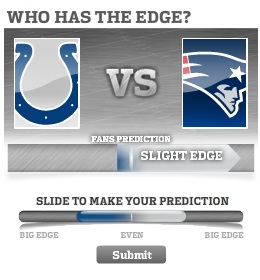 If a 20-point favorite isn't anything more than a "slight edge," then I give up. Seriously, why even have a meter like this if everything is a "very slight edge" or a "slight edge?"

If Patriots over Colts is a slight edge, then the following graphic may apply: Not that there's anything wrong with willingly having sex with Jerry Sandusky.


In the Dolphins-Broncos Live In-Game Thread on NFL.com, several posters were attacking the Miami fans by saying that their mascot is lame. One of the Fins fans defending his squad:

If that's the case, then it's quite apparent that GameCenter posters do not kill sharks.


It's official. CBS' fantasy football league manager is the worst major one out there. In addition to costing lots of money, it gives terrible advice. Facebook friend Michael M. shared this with me:

That's right - for the price of Larry Fitzgerald or Chris Johnson, you can be the proud new owner of Houston or Cincinnati's defense. Huzzah!


Some people were surprised the Ravens beat the Steelers. I wasn't. Not because I had Baltimore for a unit on my NFL Picks page or anything; but because the Ravens were granted four timeouts in the second half.

Todd Haley is a weirdo. But don't take my word for it. Check out this animated picture that forum member CrazyCarl had in his signature:

That's basically the expression Matt Millen has when he sees one of his young stallions inserting kielbasa into their you-know-whats.

Ugh, I just grossed myself out.


No one should be surprised that the Colts scored a painful backdoor cover on the final play of the game. NFL.com predicted the game would be close: I can't say I'm surprised anymore. There's no such thing as a "big edge" on NFL.com. Like if the Packers battled my local high school team, I'm convinced they'd only be a "slight edge" on NFL.com.

If Ravens over Colts is a slight edge, then the following graphic may apply: 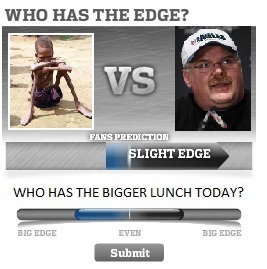 
It should be no surprise that the Ravens were "blowed" out at San Diego. Look at what the Colts did to them the week before, according to GameCenter:

That looks like a freaking roller coaster. I feel like just by looking at that, GameCenter wants to charge me $8 for a picture of me puking my brains out all over the guy seated next to me.


I have some bad news for you Giant fans. You have no shot to win the division - because you're four games behind the 49ers with two weeks remaining. This is from NFL.com (thanks Landon E.): 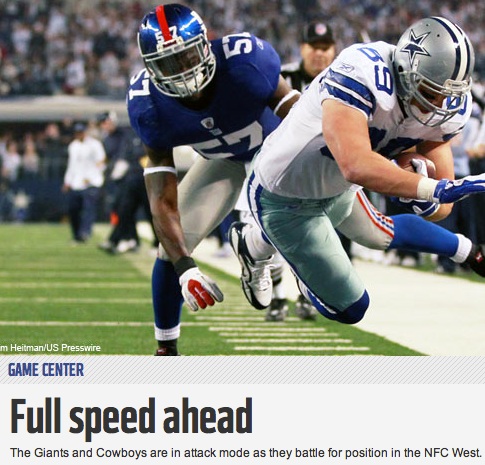 What a fool I am for betting against Aaron Rodgers.

Speaking of, forum member Alastair posted this hilarious image of Rodgers ruining what would have been a really nice picture. I don't know why the Saints played their starters against the Panthers. They had no shot at the No. 2 seed. Even if the 49ers had lost to the Rams, they still would have maintained the No. 3 seed.

Don't believe me? Fine. Just check out this poll an e-mailer sent over: See? The 49ers would have gotten the bye no matter what (barring a tie).


Curse you, Giants, for eliminating the Cowboys. This prevented us from watching an epic scene like this unfold in the playoffs: 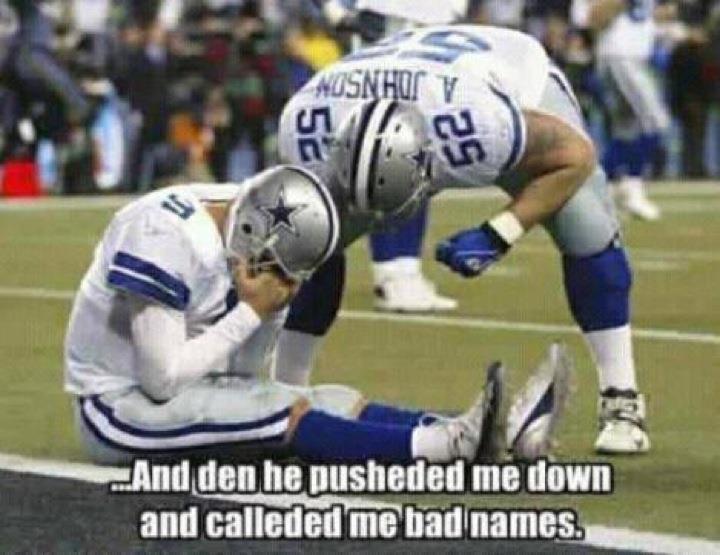 I don't see how the Eagles can replace offensive line coach-turned-defensive coordinator Juan Castillo with Steve Spagnuolo. Spags is a good coach, but Castillo was the first coordinator in league history to do something like this, courtesy of NFL.com:

That's even more impressive than a shutout! There's no way Castillo can be let go.


Why has Mark Sanchez regressed so much? Is it a lack of talent? Poor football IQ? No. Here's why: If I were dating that, I seriously doubt I would have the motivation to improve as a quarterback.


I loved Tim Tebow's passion and emotion on the sidelines, but even he would disapprove of this NFL.com GameCenter graphic:

Come on, GameCenter. Just because Big Ben was accused of touching some girls inappropriately doesn't mean that we have to kill him and pretend he was never a life form.