I had an NFL Draft Rumors section last year that I updated daily. It came quite handy when compiling my 2015 NFL Draft, and besides, all of the rumors were fun to look at. As I was updating my 2015 NFL Draft Rumors page, I wondered which national reporters and local writers were the most accurate with their breaking news, sources and information. I did this for the 2013 rumors, so how did it hold up this past year?

I took a glance back and counted how many "wins" and "losses" each reporter had. I didn't look at whom they slotted in their mock drafts - the Wall Street Journal did a good job of that - but rather, my task was delving into reports that said "Team X really likes Player A," or "Team Y plans to trade up."

I've also included the top 10 best reports and top 10 worst reports for 2015, so check those out below the following wins and losses (Note that these aren't exactly ordered by percentage; getting a report right is difficult, so I wanted to award those who had more correct. As a result, it's sort of a mixture). Follow @walterfootball for updates.


10. While some thought the Falcons would draft Todd Gurley and Randy Gregory (more on that later), there were some who picked up on Atlanta's true interest:

9. There were plenty of reporters pointing DeVante Parker to the Dolphins, but Barry Jackson was the first to do so:

8. This would've been higher on the list had Dan Pompei not conceded that he could be wrong:

7. Tony Pauline didn't provide a specific prospect for this match, but he correctly reported the position the Bengals would address:

4/28: There's a "very good chance" Cincinnati picks an offensive tackle in the first round. - Tony Pauline

6. Pinpointing a prospect a team is going to select in the second day is pretty difficult:

3/26: "I'm told the Philadelphia Eagles are very high on Rowe, who's drawing intrigue based on his size/speed and ability to line-up at either cornerback or safety." - Tony Pauline

5. Here's a similar report for another team:

2/22: "Browns intrigued by Utah DE/OLB Nate Orchard. Brass had a lengthy interview with him at Senior Bowl." - Jeremy Fowler, ESPN

4. The Ereck Flowers guess flabbergasted Mel Kiper - even though he mocked Flowers to the Giants - but there were some, including Charlie Campbell and Jordan Raanan, who were on it:

4/25: It's "hard to figure" in terms of whom the Giants like between Ereck Flowers and Brandon Scherff, but Flowers is the guess. - Jordan Raanan, NJ.com

3. The Marcus Peters-to-Chiefs pick came out of left field - unless you read Peter King's report:

2. I thought the Panthers were going to take Shaq Thompson in the second round. I should've paid more attention to this report:

4/26: The Panthers have shown great interest in Shaq Thompson. "If Carolina picks Thompson and he wants to play this year, his best option may be at safety because of his size and strength." - Jonathan Jones, Charlotte Observer

1. I listed Charlie Campbell atop the rumor rankings, citing that he went 9-2 this year. Since he works for this site, you won't be able to take my word on it, so here's proof:

This came before anyone else locked Jameis Winston to Tampa:

1/18: "Per our sources with the Buccaneers, the organization currently prefers Jameis Winston over Marcus Mariota." - Charlie Campbell

As evidence, here's something from Adam Schefter 11 days later:

Charlie was all over Tennessee's pick as well when many others thought it would be Leonard Williams:

1/18: "The Titans will consider a quarterback with the second-overall pick, and Mettenberger's rookie year won't prevent them from taking a signal caller at No. 2." - Charlie Campbell. Click here for more on the Titans drafting a quarterback.

4/30: "Sources say that Vic Beasley's most likely landing spots are to the Jets, Bears and Falcons." - Charlie Campbell

4/30: "If Houston remains at 16, Breshad Perriman and Nelson Agholor won't be in the running for the pick." - Charlie Campbell

As for visual evidence...

While others were speculating trade options, Charlie had Mariota locked in five hours before the draft, though it's worth noting that we always had Mariota going to Tennessee. 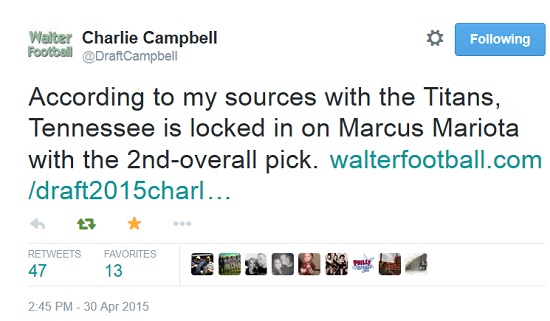 One Jaguar beat writer said the pick won't be Dante Fowler. Charlie called Fowler to Jacksonville four hours before the draft (we actually had it earlier, hence our mock picks, but that's when he tweeted it out). 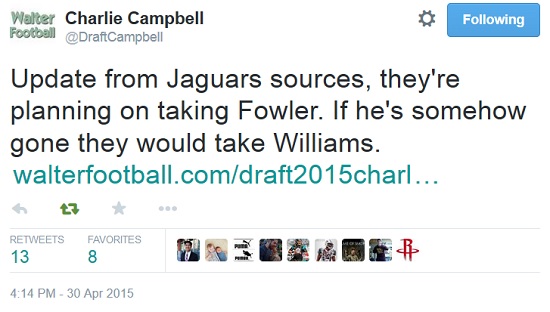 If No. 3 overall wasn't enough, Charlie had Jacksonville's second-round pick. 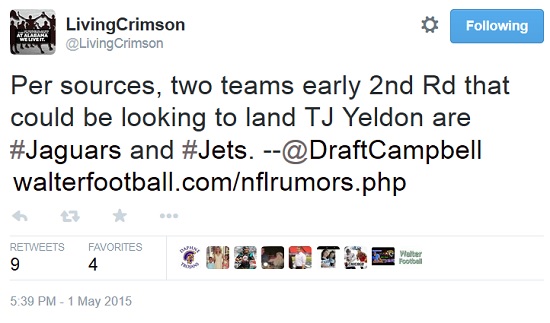 And here's another correct second-round pick. 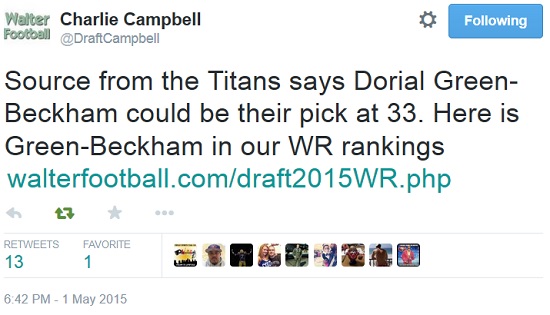 
10. It's safe to say that the Panthers did, in fact, out-think themselves:

4/28: "I'm even more convinced the Panthers don't outthink themselves and grab a left tackle with No. 25 pick." - Steve Reed, Associated Press

9. I referenced this earlier. For some reason, this circulated more than Charlie's report:

8. Here's a quarterback every single team slept on:

2/21: "So much Jameis Winston-Marcus Mariota talk. But don't sleep on UCLA's Brett Hundley, whom Browns would have considered in top 10 last year." - Adam Schefter

7. Remember the bogus Bryce Petty buzz? It came from three individuals. Here's one:

4/30: Saints have legit interest in Bryce Petty and that they know the Bills are serious about him, too. - Charles Robinson, Yahoo! 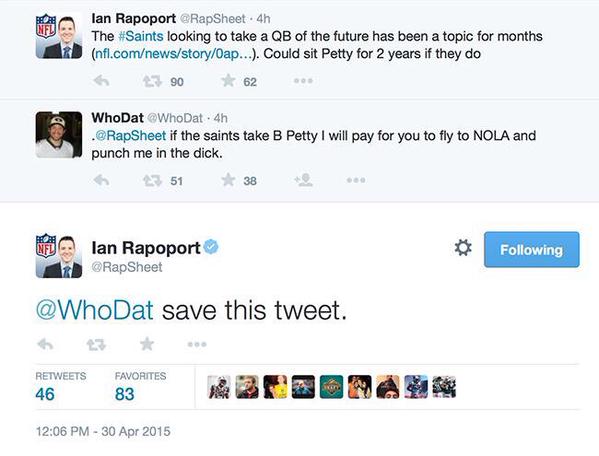 Miller has gotten into trouble in three consecutive drafts now by glorifying pedestrian quarterbacks, citing Matt Barkley wouldn't fall past the Cardinals at No. 7 and then saying that fifth-rounder A.J. McCarron wouldn't drop beyond No. 16 last year.

Both ended up going in the fourth round.

I literally said aloud, "Oh my God" when I reread that for this column.

2. Believe it or not, this one is even worse:

4/30: "Personnel man with a top-10 pick tells me his team is prepared to draft Randy Gregory tonight. 'We're not going to let him get past us.'" - Rand Getlin, Yahoo!

Did Getlin mean "top 10" in the second round? Because he still would've been wrong.

4/13: "The latest I'm hearing now from my sources around the league, who are pretty wired in, is that Marcus Mariota is going to go number one now to the Tampa Bay Buccaneers." - Ron Jaworski

It was painfully obvious to everyone that the Buccaneers were going to pick Winston, and that no one, save for one rogue owner, had any reservations about it. They refused to hire Marc Trestman as their offensive coordinator because he wanted Marcus Mariota, for crying out loud. Charlie, Pat Yasinskas and PewterReport.com, three people/entities who have been accurate about the Buccaneers over the years, were all over this story.

So, where did this rumor come from? Who are these sources of Jaws'? And how are they "pretty wired in?" Were Jaws' "wired in" sources the voices he heard in his head when he was watching countless hours of film? Because that's the only explanation I have for this rumor.

Once again, check out the 2015 NFL Draft Rumors here. I'll notify you of updates on Twitter, so follow me @walterfootball.