I've been trading stocks since 2009, but really amped up my activity once the pandemic started to offset advertising losses. I've done quite well in my trading, so I thought I would share my positions, as well as my due diligence behind them.

If you haven't been following it at all, you might assume that GameStop is on the verge of bankruptcy. You may think of it as the next Blockbuster. This thesis couldn't be further from the truth. GameStop has done a great job of re-branding itself. Its online sales have skyrocketed, showing an increase of 800 percent in Q2 (source.) GameStop now provides same-day delivery, giving it an edge over Amazon and Wal-Mart. It revamped its Web site and app. It's on pace for a billion dollars in e-commerce in 2020.

If that's not enough for you, Ryan Cohen has bought 10 percent of the company. Cohen was the former CEO of Chewy, and he sold it for $3 billion. Chewy became a great company because of its retail/e-commerce hybrid model, and Cohen plans on transforming GameStop into a similar type of entity to compete with Amazon like Chewy does. In fact, Ryan Cohen sees GameStop rivaling Amazon long term. That may sound odd at first, but think about it: Cohen's former company, Chewy, rivals Amazon in its sector. With same-day delivery and an already-established brand, GameStop can rival Amazon in the gaming and computer accessories sector.

Cohen's plan is why GameStop has been closing plenty of stores lately. The plan is to shut down the least-profitable establishments and keep the most-profitable ones open while increasing an online, same-day delivery presence. Cohen is extremely selective in his investments, so his purchase of GameStop really turned some heads. I was already an investor, but that 10-percent stake made me even more convinced that the stock will skyrocket.

Cohen's investment is far from the only reason to be bullish on GameStop. Other reasons include:

With all of these positive factors, GameStop must skyrocket. It's a guarantee because its short interest, as of this writing, is way above 100 percent, with $70 million shares shorted and $48 million public float. This means that every single share of GameStop has been shorted, plus numerous extra. Short sellers did this because they thought bankruptcy was inevitable, but that thesis has been debunked. GameStop has nearly a billion dollars in cash, the new consoles have disc drives, and the company's S&P credit rating just improved. And, as mentioned, with Playstation 5 and the new XBOX consoles set to be released within weeks, GameStop will rake in tons of money.

If you're looking at the chart, you may have seen that GameStop recently dropped from $15.60 last Friday to $10.49 heading into Halloween weekend. This was the byproduct of election week (most stocks plummeted) and short selling on low volume. Once the volume picks up, presumably after the election and when the consoles are released, GameStop will be back at $15 and will continue to climb.

GameStop is up about 10 percent since I recommended it here last Monday. There's exciting news coming beyond the console releases this week: 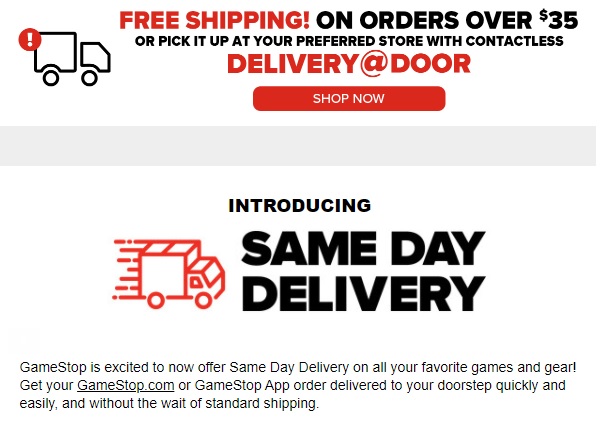 That's right - GameStop is now offering free shipping on same-day delivery above orders of $35. That's awesome because it will allow GameStop to compete with Amazon in their particular sector.

Also, GameStop just filed an 8-K this afternoon. They announced that they are paying off $125 million in debt early. This will crush any sort of bankruptcy thesis the short sellers still may have foolishly believed. GameStop will skyrocket soon, and once it does, it'll go up even more because of the massive short squeeze.

I'm currently in several other positions. I don't have time to post all of the due diligence on them now because I'm busy with the NFL season, but I will provide more analysis come January.

Here are the other positions. I'm not as high on them as GameStop, but I'm heavily invested in each: